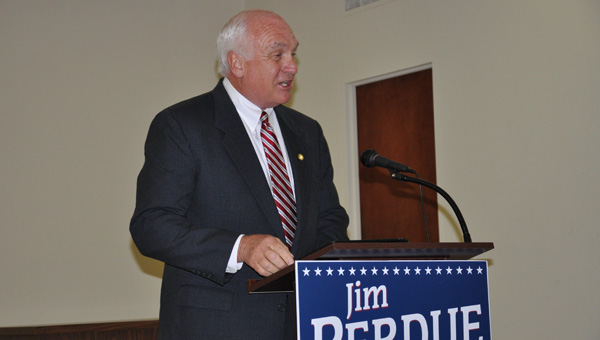 For nearly 12 years, Perdue has served as probate judge.

“If not for you and my family and my church and many of my friends across the state this would not be possible,” he said. “This is a great opportunity for someone like me. I’ve served as chief election official in the county, and have worked with the other 66 probate judges in the state.”

He has served as legislative coordinator for the Probate Judges Association, as well as president.

Prior to being named probate judge, he owned a construction company and worked with the Federal Reserve.

“All of this has prepared me to do several things and has created many opportunities,” he said. “After much prayer and discussion, I am officially announcing my candidacy for secretary of state for the great state of Alabama.

During Perdue’s time as probate judge, he has worked to make the tag office a one-stop place, among other things.

“I want to work with every county to do the things we have done here,” he said.

Perdue said he truly wants to do the secretary of state job.

“I’m not trying to make a name for myself,” he said.

“I want to make sure we get their ballots to them timely and they get returned timely,” he said.

Additionally, Perdue wants to examine election expenses and pare down expenses, and ensure there are efficient polling places.

Earlier this year, Rep. John Merrill of Tuscaloosa, who is also a Republican, announced his candidacy. Perdue will face Merrill in the June 2014 Republican primary.