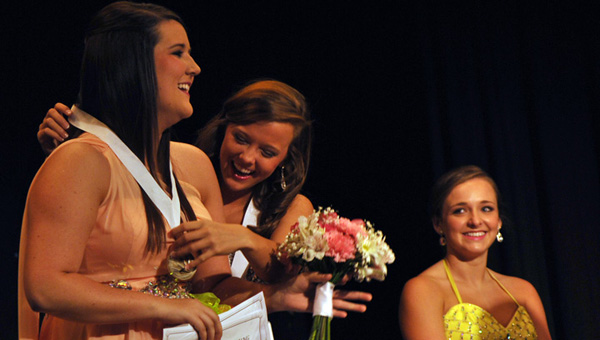 She will represent Crenshaw County in January at the state competition.

Jones said Monday she was “very surprised” when her named was called.

“I knew all the girls were tough competition,” she said. “I was shocked and happy. I am excited for the opportunity.”

Jones participated last year as a Little Sister in the program.

Jones encouraged girls from Crenshaw County to participate in next year’s program.

“It has something for everyone,” she said. “It’s lots of fun, and helps you as a person.”

Jones said throughout the week, she learned to be more independent.

“I learned you can’t rely on mother and father always,” she said. “You have to solve things for yourself.”

“I’m looking forward to getting to meet all the other participants, and, of course, representing Crenshaw County.”

She is the daughter of Billy and Cindy Jones.

CCA senior Maribeth Newton was named first runner-up, and also won the Be Your Best Self Essay competition, and interview category.