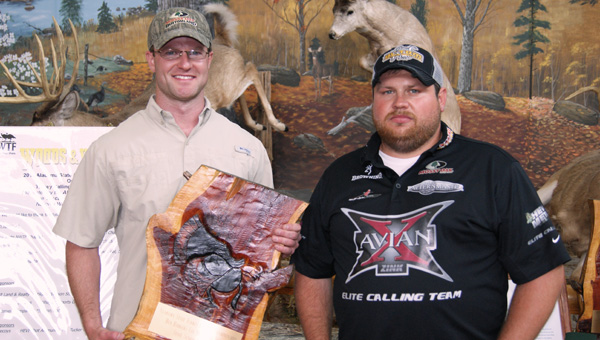 It had been six years since Jared Lowe entered a turkey-calling contest.

On June 8, the Georgiana native won the 2013 Alabama State and Legends Memorial Turkey Calling Championship in Tuscaloosa. The win automatically qualifies Lowe for the Grand National Calling Championship, which will be held in February at the National Wild Turkey Federation’s 38th annual National Convention and Sport Show in Nashville.

Lowe said his desire to compete in the contest came from his love of hunting.

“I’ve always enjoyed hunting, and I enjoy turkey hunting more so than anything else,” he said. “Because of that I’m big into calling and trying to perfect the sounds (a turkey makes).”

Lowe won the state championship by performing a plain hen yelp, a fly down cackle, a kee kee run, and a cutting of an excited hen.

Lowe won the contest using a mouth call that he made himself.

“Most calls you buy off the shelf are massed produced,” Lowe said. “If you have your own press, like I do, you can make your own calls and they tend to be more consistent. It takes some trial and error, but once you find what you like and what works best for you, you can consistently make the sounds you’re looking for to attract a turkey. Then it’s just practicing until you get them right.”

For Lowe, there will be plenty of practice in the future to prepare for the Grand National Calling Championship.

“I’ve got a lot of work to do between now and then, but I enjoy it,” Lowe said.

The Grand National Calling Championship will be held Feb. 13-16 at the Gaylord Opryland Resort and Convention Center.