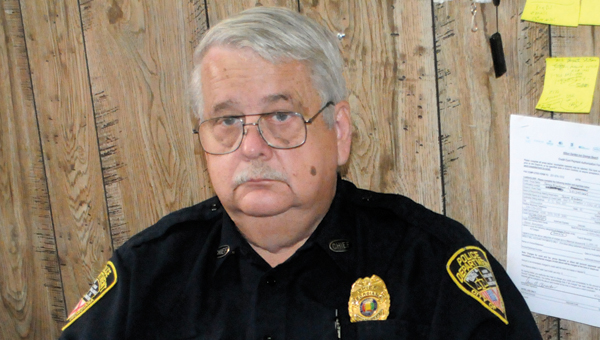 After 42 years of service in the Georgiana community, police chief James Blackmon will be hanging up his hat for the final time on July 31.

Despite spending more than four decades in the realm of law enforcement, it was very nearly a field that Blackmon avoided altogether.

“When I graduated high school, I went to junior college down in Andalusia, at LBW, and I was studying business administration,” Blackmon said.“But after two years, I woke up one morning and said, ‘This ain’t what I want to do. I want to be a policeman.’”

It was as simple and as sudden a change as that, thanks in no small part to Blackmon’s father, who was the police chief of Georgiana at the time.

If not for his father’s influence in those early days, Blackmon said, he would not be the policeman he is today.

But, more importantly, he wouldn’t be the man he is today.

“It’s easy to be a policeman and go out and arrest the bad guy, but it’s harder to get out there and help the people if they are having problems,” Blackmon said. “That’s something my dad taught me when he was the police chief.  Over the years, I’ve had countless people come in with different problems, and some of them may not be related to law enforcement, but I always try to help everybody.  I haven’t always been able to help everybody, but I tried, and the people respect that.”

But Blackmon said that it’s time for new blood to take on the responsibility, although his retirement won’t affect the role he plays in the Georgiana community.

“I’m still going to be a certified police officer, and if they need an officer to get out here and ride the streets on an emergency situation, they can call me and I’ll be right there to help,” Blackmon said. “I don’t plan on retiring to a rocking chair just yet.”

However, Blackmon would be already seated in that chair if not for the efforts of Georgiana mayor Jermone Antone, who Blackmon called a “close friend whose ideas he supports 100 percent.”

Antone similarly showed a great deal of admiration for Blackmon, but acknowledged the new set of challenges facing the town in selecting a replacement.

“We will appoint Isaac Ward to be acting chief of police for six months,” Antone said. “But Chief Blackmon has meant a lot to the town for a number of years.  He’s not just a good chief, but he’s a good person, and that means more to me than anything.  He will be greatly missed, but he will always be just a phone call away”