Candi Carpenter, wife of Luverne native Bobby Tomberlin, is currently preparing to record her first full-length album, after a long road to stardom.

Carpenter, left high school to begin her professional career in music at the age of 15, moving from Lansing, Mich., to Nashville, Tenn.

The then-15-year-old made her home in a rundown motel room downtown Nashville and begin playing the smoke-filled stages of bard and honky tonk dives.

Phil Everly of the Everly Brothers said, “If her future is as bright as her talent, this is going to be a very big star.” 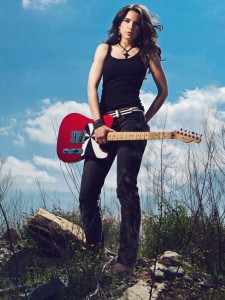 Tomberlin said Carpenter has a video that is currently in rotation on The Country Network and has recently had an offer from a major network for her own documentary series.

Luverne has become Carpenter’s second hometown, and she’s so grateful to the support of the community she has come to know as family, according to a press release issued by Tomberlin.

Plans are to have an album release party in Luverne later this year.

“Candi loves Luverne, and we both do a homecoming show in Luverne each year, and bring one of the writer/artists friends as our guest,” Tomberlin said.

She is set up on the Indie Gogo campaign to allow fans to pre-order the album.

Fans can visit www.candicarpenter.com for more information on how to pre-order her album.