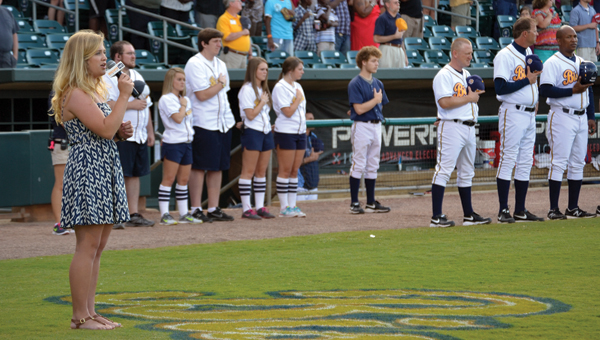 Fort Dale Academy junior Cailyn Thompson performs the National Anthem prior to the Montgomery Biscuits’ game with the Jackson Generals on May 25. (Courtesy Photo)

It wasn’t the most nervous that Cailyn Thompson has ever been, but it was close.

With more than 3,000 people looking on at Montgomery’s Riverwalk Stadium, Thompson belted out the National Anthem.

And just like that the Fort Dale Academy junior had knocked an item off her bucket list.

“It was pretty nerve-racking,” Thompson said. “I’ve never sang in front of that many people, but I’ve always wanted to sing the National Anthem at a professional sporting event, so I thought why not give it a try.”

Despite the nerves, Thompson said she enjoyed the opportunity.

“I like to sing a lot, and I really like to sing the National Anthem,” she said. “I also really love baseball, so for me it was a lot of fun, even though I was nervous singing in front of so many people.”

Thompson joked that it helped that most of the people in the crowd were strangers.

“I knew that at least I wouldn’t have to see them the next day,” she said.