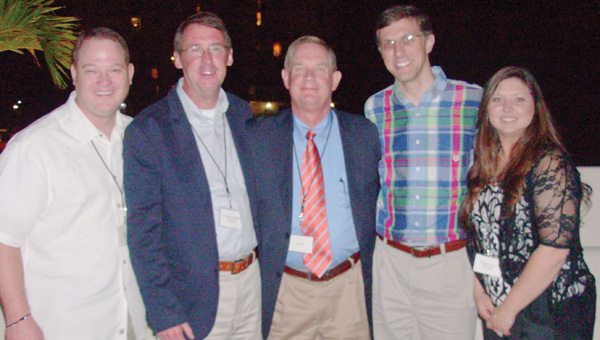 Kenny Horn, a resident of Luverne, was recently honored with the Heart of Compassion Award at a national conference in Miami.

Horn volunteers with Hospice Advantage in Troy as a grief counselor and chaplain, and he was nominated for the company’s Grief Support Specialist of the Year award.

Hospice Advantage has 56 locations in 10 different states, and Horn’s category was combined with other family support service categories, so he said he was a little surprised when he found out that he was finalist.

“I never dreamed that I would get the award with so many that are qualified,” Horn said.

He got a phone call that the company wanted to fly him and his wife Peggy to Miami for the company’s National Hospice Medical Director Conference at the end of April.

“We booked the flights and went on down there,” Horn said. “It was such an honor because not just employees were there — all the medical doctors affiliated with Hospice Advantage across the country were there.”

The Heart of Compassion Award recognizes achievements across five disciplines including chaplaincy. Honorees are judged upon the impact made in key focus areas including clinical competency, impact in the community they serve, and their role as part of the hospice team.

“It was kind of a big surprise,” said Horn about winning the award.

“Brother Horn is truly dedicated to hospice. He is respected in his community and also by his colleagues, patients, and their families. We are proud to have him on our team and to celebrate this achievement alongside him and his family,” said Hospice Advantage President Rod Hildebrant.

Horn has lived in Crenshaw County for more than 40 years, and the Hospice Advantage office in Troy covers Crenshaw in addition to Pike, Coffee, Dale, Bullock and Barber counties.

“It’s an honor to be able to serve in the area that I live,” he said.

One of his trademarks is his guitar, which he carries with him while visiting patients.

On many occasions he has fetched the guitar from his car to play and sing gospel songs.

Horn also has experience as a pastor, and he draws on that experience while ministering to patients.

“It’s a difficult job, but it’s very rewarding,” he said. “I feel like the Lord has equipped me to do this kind of work.”

Before retiring and taking up a career as chaplain, Horn worked as a high school math teacher.

He and his wife Peggy have two grown children and four grandchildren.

Sexton murder case to be sent to grand jury