Brantley tabbed for Hall of Fame 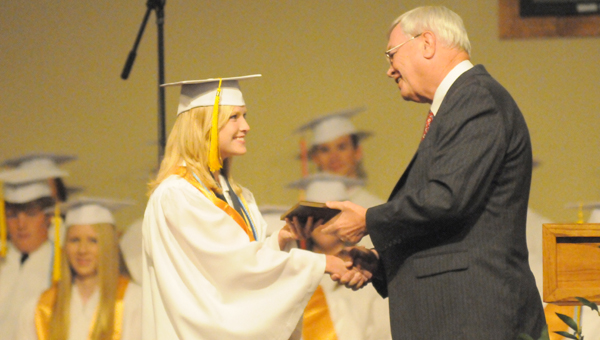 Although Hall of Fame inductees usually invoke visions from the realm of sports, one longtime Greenville educator is being considered an all-star for altogether different reasons.

David Brantley, headmaster at Fort Dale Academy for the past 17 years, was recently recognized as one of 13 individuals to join the Alabama Independent School Association (AISA) Hall of Fame.

“It’s an honor to be recognized by the AISA, and it’s been an honor to work at this school for the past 17 years,” Brantley said.

“Each and every day has been a blessing to me.  It’s a good place, filled with good people — students, parents and teachers — and it’s just been my pleasure and a privilege to be a part of it.”

Despite a storied career in school administration, Brantley’s early involvement with athletics almost led him into the world of coaching.

Brantley said that it was because of two early role models — his high school coach and principal — that he was granted an appreciation of working with young people.

Although society has become quite a different place in his 35 years of working with children, his philosophy at FDA remains unchanged.

“We have attempted to provide an environment where the children can be successful, and also where they can enjoy their time in school,” Brantley said. “What we would like to do at the end of the school year is for a student to be able to look back and say, ‘I’ve accomplished, and I’ve enjoyed my school year.’”

Former AISA board chairman Calvin Poole said that Brantley has been an outstanding leader, administrator and headmaster during the past 17 years at FDA but, more than that, he has been a true friend.

“During my tenure as board chairman, I came to value David’s friendship even more than his wisdom and advice, because I knew that the welfare of the students was always his top priority,” Poole said.

“I believe that most of our parents would say the same thing, that they view David not only as a gifted educator and a skillful administrator but also as a trusted friend who really cares about their children.”

Although Brantley said that he considered it an honor to be counted in such company as the other AISA inductees, the accomplishment was more a testament to the work of many.

“I think it’s a compliment to our school, and to our board, faculty, parents and students,” Brantley added.

“It shows that we are a family that has been able to work together and have continuity.  We all can share in this.”