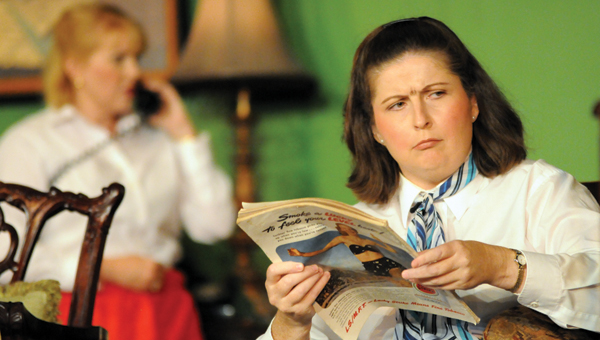 Mollie Waters, right, pictured performing in “The Mousetrap” last August, will direct, the newly formed Greenville Community Theatre’s production of “Crimes of the Heart.” Auditions will be held Tuesday from 5:30 p.m. until 7 p.m. at the Ritz Theatre. (File Photo)

Not yet into the dog days of summer, one local organization is hoping to reignite passion onstage in the Camellia City and help the theater scene bloom anew.

Next week, the newly formed Greenville Community Theatre group will be holding open auditions for “Crimes of the Heart” at the Ritz in downtown Greenville.

For the past two years, the organization has put on summer productions under the umbrella of the Greenville Area Arts Council but, due to other commitments, the council was unable to sponsor 2013 production.

Director Mollie Waters said the Greenville Community Theatre was created to keep the summer tradition of staging a play alive.

“We wanted to be able to continue with these summer productions now that we’ve got the momentum and people know that we’re going to be doing summer productions,” Waters said. “So we’ve created the Greenville Community Theatre in an effort to continue to have an additional avenue for people who have lots of local talent and energy and a desire to perform.”

“Crimes of the Heart” revolves around the plight facing three sisters, Meg, Babe and Lenny McGrath, who reunite at their grandfather’s Mississippi home after one of the sisters has shot her abusive husband.

Their reunion brings past troubles to light for each of the sisters, as their current predicament compounds the dilemma even further.

Waters said that there were a couple of reasons why the play was chosen for the new group’s first production.

“First of all, we figured out the last couple of years that Southern works are better received in the South than any other type of theater,” Waters said.  “It’s also set in the 1970s, which makes it somewhat more modern and, for that purpose, a little easier for us to come up with costumes and sets than it would be for something that was older.”

As “Crimes of the Heart” marks the first production for the group as well as her first time sitting in the director’s chair, Waters said that she didn’t want to get in over her head with a large cast.

Even though there are only four females and two males in the play, chemistry is a necessity, especially for the actresses portraying the three sisters.

“The play just won’t be successful if your three leading females don’t have good chemistry on the stage and aren’t able to play off one another, so I’m definitely looking to work with people who have the ability to work well with others,” Waters said.

“Also, we’re looking for people who have energy, who want to do this, and just have a desire to work on stage in a traditional performance.”

Waters’ feelings have run the emotional gamut as far as her role as director is concerned, but excitement prevails over all of them.

But more than that, it’s an opportunity to learn alongside her cast.

“I have a masters of liberal arts degree with a concentration in theater, but it’s always been more on the academic side, and it’s never really been the production side,” Waters said. “So for me, this is going to be a true learning experience, and I’m looking forward to having a great cast and crew to work with me and help me learn along the way.”