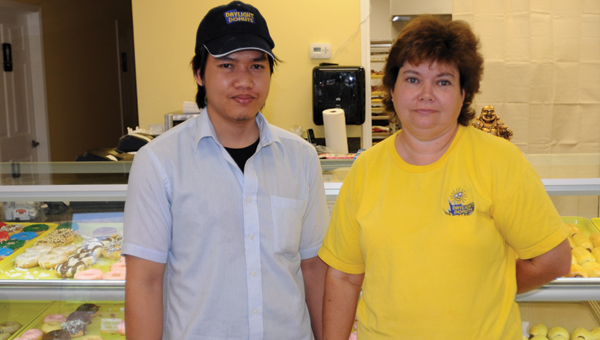 Kim San Ouk , left, and Gina Morgan, right, pose in front of cases filled with a wide variety of donuts made fresh daily at Daylight Donuts, which recently opened on the Greenville Bypass across from the YMCA. (Advocate Staff/Jonathan Bryant)

For the past few weeks, early birds in the Camellia City looking for a breakfast destination have had something new to crow about.

A visit to the recently opened Daylight Donuts establishment is a genuine attack on the senses.

A colorful array of soft, warm and succulent donuts line the display underneath the register, tantalizing all who enter.

The aroma billowing from the kitchen is almost a tangible force, entrancing those caught in its wake.

And there are few things in this world that rival a freshly made donut, no matter the topping or filling of choice.

And Daylight Donuts specializes in choices — the restaurant has eight different fillings for donuts and éclairs, and a variety of both traditional and non-traditional toppings.

But contrary to the name, donuts aren’t the only items that comprise the Daylight Donuts menu.

Store manager Kim San Ouk said that Daylight Donuts is all about competing with all other breakfast options in Greenville.

“We have burritos, croissants, biscuits and éclairs, and they’re made fresh every day,” Ouk said. “But the kolaches are the No. 1 seller here.”

For the uninitiated, kolaches are smoked sausages peppered liberally with cheese and the option of added jalapenos, all wrapped in dough.

In essence, they are the Czechoslovakian alternative to pigs in a blanket.

In addition to the more exotic offerings, Ouk has made an effort to spice up more traditional fare on the menu to give it a wholly unique appeal.

“He has something special that he does with his biscuits,” said cashier Gina Morgan. “I can’t say (what it is), but he’s got something that makes his biscuits great.”

Still, the heart of the Daylight experience lies within its namesake, and giving the customers a fresh experience each morning is something that Ouk takes great pride in ensuring.

“We come in at 2:30 or 3 a.m., and we make everything really fresh for the customer,” Ouk said. “The rest of the donuts that aren’t used or sold are thrown away.”

Despite the demanding tasks often required of him, Ouk said that the past few weeks have been wonderful, mostly due to the Greenville residents who have made the Camellia City feel like home.

Although he originally came at the request of his brother, the owner of the establishment who has been in the donut business for the past decade, Ouk said that Greenville has become a home away from home.

“The people here are very nice, and I feel like Greenville is a lot like my hometown in Cambodia,” Ouk said. “I wish that maybe, when business is going really well, I’d like to take over for my brother and move to live here.”

Daylight Donuts is located on the Greenville Bypass across from the YMCA, and is open seven days a week from 5 a.m. until 6:30 p.m.