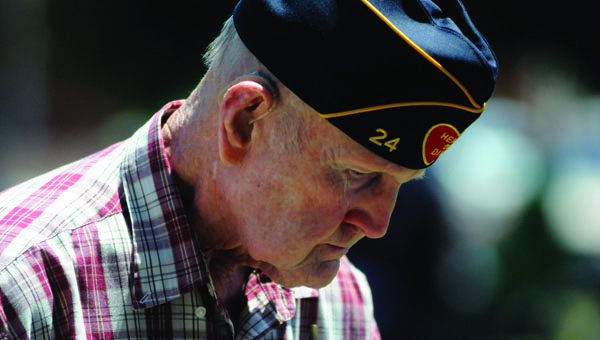 The Greenville Lions Club held its 9th annual Memorial Day Celebration Monday in Confederate Park. The event is held to honor the memory of those who died while serving their country. There was also a Walk of Honor held to recognize veterans who attended the program. (Advocate Staff/Jonathan Bryant)

As “Taps” echoed throughout Confederate Park, dozens of Butler County veterans reflected on a life spent in service of those they held dear.

Monday’s annual Memorial Day Celebration, hosted by the Lions Club, marked an opportunity to celebrate the lives of the men and women who have lived their lives in service to their country, as well as a chance to remember those who gave their lives to protect it.

But according to Lion Hubert Little, it was not a day for mourning.

“May we remember, and then commit, to protect what they paid for,” Little said.

Despite the appropriately solemn nature of the program, the atmosphere surrounding the celebration both before and after the main program was a festive one, thanks in large part to live music from members of the surrounding area.

Fire, a local Christian band from McKenzie whose unique medley of sounds spanned across multiple genres, kicked off the celebration with a set that entertained the crowd until the opening moments of the ceremony.

Following that was a patriotic performance from the Stringfellows, an all-female trio of violinists.

But the heart of the Memorial Day service surrounded the Articles of Association, one of the oldest and most treasured documents written in the establishment of the United States.

The historic document was held on display in the Greenville City Hall lobby for viewing.

Bill Stone served as the keynote speaker. Stone previously presided over the General John Archer Elmore Chapter of the National Society of the Sons of the American Revolution. His message was one of remembrance and of the importance of preserving our American history and culture.

The particular copy of the document that the Sons of the American Revolution carried was the only version signed by notable figures such as George Washington, John Adams, Samuel Chase and other founding fathers.

Stone said that the Articles of Association have much more historical significance than the average person would suspect.

After a curious student at the University of Tennessee inadvertently stumbled across the historical document found tucked away in the first edition copy of an antique book in 1978, the signed parchment was then donated to the Sons of the American Revolution.

Since then, the organization has traveled the country with the hopes enlightening others about our country’s past.