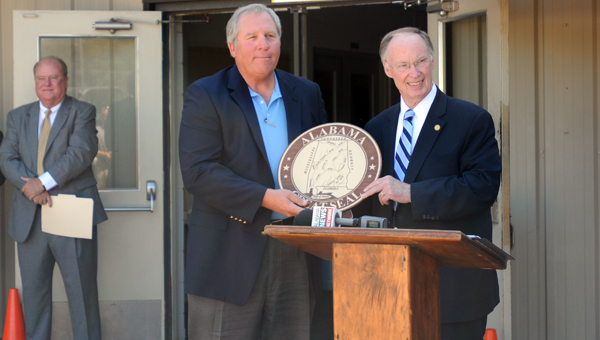 Ozark Materials announced Friday that it will establish a new production facility in Greenville.

The plant, which will initially create 40 jobs, will be located in the former WestPoint Home facility and will produce thermoplastic.

“From the first time I came down here and saw this plant, and met with (Greenville Mayor Dexter McLendon), I wanted to come here,” said Lee Gross, president of Ozark Materials. “We feel like this facility and this community are a great fit for our company. I’m all about a handshake and a man’s word, and I found that in (McLendon.)”

Gross said that along with creating the new jobs, the company will be making a $3 million investment in equipment to get the plant operational. He expects the plant to be delivering material by February or March.

February will mark a year since the City of Greenville purchased the 300,000 square-foot building for $750,000 in the hopes of attracting a business to the area.

“I know when we bought this building there were some people who wondered what we were doing and if we had lost our minds,” Greenville Mayor Dexter McLendon said. “We had a plan in mind. You don’t go buy a building like this in Greenville unless you have someone to go in it.”

Gov. Robert Bentley, who was on hand for the announcement, applauded local officials for their role in bringing Ozark Materials to the Camellia City.

“Most of the time, the state takes the lead on projects like this,” Bentley said. “That’s not the case here. This was a local issue, and the mayor, the councilmembers and the commissioners did a great job of selling their community.”

McLendon said the project likely would not have happened had it not been for the city’s partnership with the Butler County Commission, which contributed $50,000 toward the purchase of the building, which was later transferred to the Industrial Development Board of the City of Greenville.

“We work together in Butler County,” McLendon said. “We believe if we work together we can do anything. We try to solve problems together, and we work hard together to try and create jobs. To be honest, I don’t know if we would have been able to do this without the county’s help.”

Butler County Commission Chairman Jesse McWilliams said he and the commission were willing to do whatever they could to help find a way to create jobs for Butler County residents.

“We made a commitment a long time ago to do whatever we could to attract jobs to the area,” he said. “This is a great day for Butler County, and were glad to have Ozark Materials moving into this building and becoming a part of our community. It’s nice to have someone back in this building and jobs coming to Butler County.”

McLendon said he believes the arrival of Ozark Materials to the area, along with recent announcements of expansions at Hwashin America and Coastal Forest Products, may be signs of an economic upturn.

“I think we’re starting to see things get better,” he said. “The biggest thing is that you have to have jobs. The more jobs you have the more money that is being circulated through your economy. It’s all about jobs. If we can create jobs, things will continue to get better.”