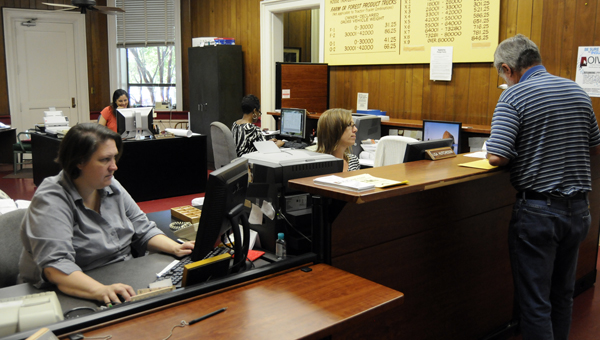 The Butler County Commission approved a request from Probate Judge Steve Norman for a nearly $7,200 renovation project that will replace the current counters in the office with new counters that include partitions. (File Photo)

Plans are in the works to give the Butler County Probate Office a new look.

The renovation project would replace the current counters in the office with new counters that would include partitions that would separate the clerks from the customers, similar to what is found in the Revenue Commissioner’s Office.

Norman said the request was spurred on in part by a new law that took effect in January.

The Alabama Mandatory Liability Insurance law, passed in 2011, established an online insurance verification system. When a driver submits proof of vehicle insurance, the information, including policy number and vehicle identification number, is placed in an online database to confirm that the insurance policy is actually active. If there is no active insurance, the person is unable to renew or obtain tags for his or her vehicle.

If a vehicle title lists a deceased spouse or a former, divorced spouse, some drivers may have to purchase a new title to update the information. A driver’s license is also required for people renewing the tag as well as anyone else who is listed as the owner of the vehicle.

“When the changes came into play in January there were some angry folks,” Norman said. “The way things are now there’s no partition between the clerks and the public. In January, my (clerks) came to me and asked if there was any way we could get a partition, similar to what they have in the Revenue Commission’s Office, as a safety precaution.”

Norman said the counters currently located in the office are also “not in very good shape.”

“We had them put in back in 2004 and they have not held up well,” he said. “They didn’t turn out to be the quality of product we were hoping for when we purchased them.”

Norman told the commission that it will cost $5,365.90 to dismantle and remove the old counters and then deliver and install the new counters. It will cost approximately $1,800 to rewire the counters to provide the clerks with phone and Internet service.

According to Norman, it will likely be several months before the renovation project gets underway, and the renovations will  take place on the weekend in order to avoid any disruptions in service.