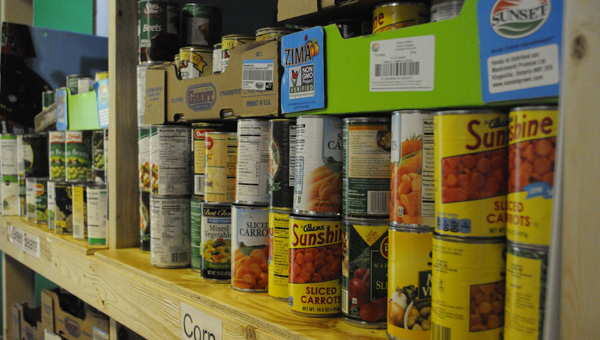 Greenville postal workers had their hands full this past Saturday with a little more than the traditional fare, thanks largely to several charitable Butler County residents.

Last Saturday, letter carriers around the county — and nationwide — collected bags of non-perishable food items for the 2013 Stamp Out Hunger campaign.

For the past 21 years, the Stamp Out Hunger food drive has provided food to local pantries that rely heavily on donations, providing more than 70 million pounds of food across America for nine consecutive years.

And, at least as far as Butler County is concerned, all signs would indicate that little has changed for this year’s campaign.

The St. Thomas Episcopal Church food pantry was one such receiving organization, and volunteer Paggie McSpadden said that the 2013 collection of food more than rivals last year’s donations.

“Last year, we provided food for preparation at home for approximately 500 individuals that would last them anywhere from 10 days to two weeks,” McSpadden said. “The post office has said that this (year’s donation) is the largest that we have had.”

St. Thomas received a large collection of donations from the Postal Service Monday, and the several following days were spent carrying, sorting and stacking the various goods.

Volunteers from a handful of surrounding churches, including Midway Baptist Church and Southside Baptist Church, aided the St. Thomas volunteers in putting the donations away.

But McSpadden said that the job of post offices workers is the most impressive and arduous of all.

Also, she found it fitting that people from every corner of Butler County, from the postal workers to the volunteers to those that donated, pitched in to help serve the county’s residents who are most in need.

According to a September 2012 report from the United States Department of Agriculture, 18.2 percent of Alabama residents live in households with low or very low food security, which was the third-highest percentage in the nation.

But McSpadden added that Butler County is one of the four least-served counties by the Montgomery County food bank precisely because of programs such as the Stamp Out Food campaign.

Despite the incoming flood of donations from around the county, the St. Thomas food pantry is nearly always experiencing a shortage of goods on hand. To combat this, Walgreens in Greenville will be holding another food drive, called “Good Morning Greenville,” today.

Many other groups throughout Butler County have held similar drives, including Fort Dale Academy, McKenzie School and Mount Pleasant Baptist Church. Any organizations interested in conducting a food drive or would like to contribute food are asked to contact McSpadden at (334) 382-7511.