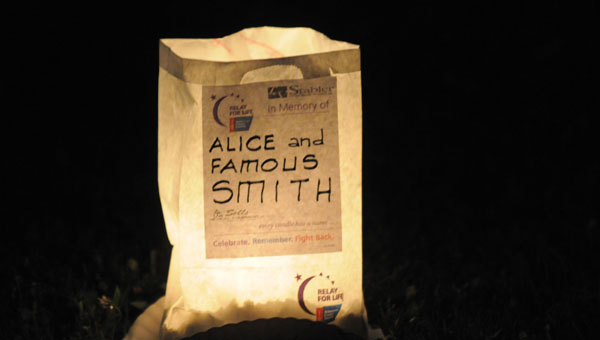 The looming threat of bad weather wasn’t enough to deter many members of the community from turning out for the annual Butler County Relay for Life, held Friday at the Greenville YMCA.

Butler County Relay for Life chairperson Marie Owens said that the event was a remarkable achievement, even if the threat of rain kept some people away.

More importantly, none of that stopped the Relay for Life from achieving — and exceeding — its goal.

This year, 30 teams participated in the Relay for Life helping raise funds for the American Cancer Society, nearly doubling the amount of participation from last year’s campaign.

Many of the teams are still rallying to raise funds, and any money raised between now and August 31 will be added to the Relay for Life total. Following a wrap-up meeting in June, all 30 team totals will be announced.

First United Methodist Church also won the “Spirit of Relay” award for its participation all night long, from 6 p.m. to 6 a.m.

With 2013 marking her first year as event chair and a committee full of newcomers in both the recruitment and sponsorship positions, Owens said that she was also a little hesitant the they could achieve their goals. But she added that an explosion of support from the Butler County community is what made it possible for Relay for Life to become a huge accomplishment in more ways than one.

“It was a huge success,” Owens said. “Everyone had a good time, the community came out and supported us, and we raised a lot of money to form a cure — and we had fun while we did it.”