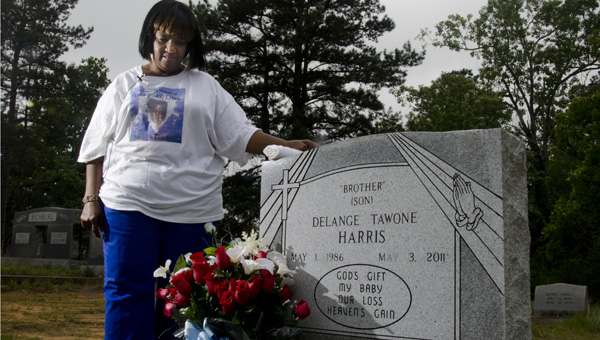 Dora Harris stands beside the grave of her son, DeLange Harris, whose murder still remains unsolved.

Last Thursday, family members of DeLange Harris gathered at the cemetery of New Hope Valley Baptist Church, a small, country church tucked away down a dirt road between Luverne and Brantley.

It was May 2 — one day after Harris would have turned 27 years old and one day before the two-year anniversary of his death.

On the afternoon of May 3, 2011, a passer-by found Harris’ body lying in a ditch beside Athens Church Road, and his death was ruled a murder.

A gentle rain started falling during the vigil as family and friends remembered Harris and his life.

DeLange’s mother, Dora Harris, said he was a son that any mother would be proud of.

She said he took the role of the man of the house and made sure that things were taken care of for the family.

“He did all the things that a man has to do,” Harris said. “I could depend on him.”

Harris said that the months before DeLange was killed were tough ones, both because of the bitter winter and because the family occasionally had trouble making ends meet.

She said he scoured their property for things that could be salvaged for money to help pay the bills.

“He did that for all the winter months, and I went, too, and we spent the most time together that we had spent in his adult life,” Harris said.

A graduate of Brantley High School, where family members say he was a good student who stayed out of trouble, DeLange was also described as someone who worked hard and loved his family.

“We all have our faults, but overall, he was a good boy — a good man,” said DeLange’s father, John Harris. “I miss him more every day that passes by.”

As evidenced by the a capella gospel singing that rang through the trees during Thursday’s gathering, faith played an important role in DeLange’s life and also in the life of his family.

“Once I realized that it was possible that my son was dead, my thoughts rose to God, to know that He makes no mistakes,” his mother said. “I told my daughter that if DeLange was dead, it’s because it’s God’s will.  He has a purpose and plan, and it’s not in vain.”

“But that doesn’t stop me from wanting my son,” she said.

Harris said that life has changed for her in the two years since her son’s murder.

She also described herself as a caring and trusting individual, but said that trust has eroded.

She said she used to feel safe going for a walk, but she doesn’t do that anymore because she doesn’t trust people.

“I don’t trust anybody around me because I don’t know who killed my son,” Harris said. “It could be somebody who is shaking my hand or laughing in my face that took his life.  I don’t trust people like that anymore.”

The case was investigated in 2011 by the Crenshaw County Sheriff’s Office, with assistance from the state, and though leads were tracked and a number of interviews were conducted, no arrest was made.

Harris called on local and state officials Thursday to continue the search for the perpetrator.

District Attorney Charlotte Tesmer said she has talked with members of the family and understands that they want closure.

Tesmer has been the District Attorney for just over a year, and she was named to that position after the retirement of former D.A. John Andrews.

“We inherited a good many cases from the previous administration,” she said. “We’re playing catch-up, and we have a lot to tend to on old cases.”

Tesmer said that the case was already being reviewed by CCSO Investigator Mike Johnson, who had recently joined the Sheriff’s Department.

She also said she was “pleased” with the work Johnson had done.

“It’s my understanding that new witnesses and information have come to light,” Tesmer said.

Tesmer had previously written to Gov. Robert Bentley about the possibility of a reward being offered in the case, and local officials got some help from Bentley’s office when a $5,000 reward was offered on April 8.

In the proclamation issued by Bentley, he states that “whereas it appears that the perpetrator or perpetrators of said crime are unknown and there are no suspects; and whereas the circumstances surrounding the crime indicate that every effort should be made to apprehend and convict the perpetrator or perpetrators,” a reward of $5,000 for information leading to the arrest and conviction of the guilty person(s) has been offered. Tesmer said it’s important to revisit cases and look for new information.

“Any help anyone has to give would be greatly appreciated,” she said. “Maybe someone knows something or remembers something from that day that may be important.”