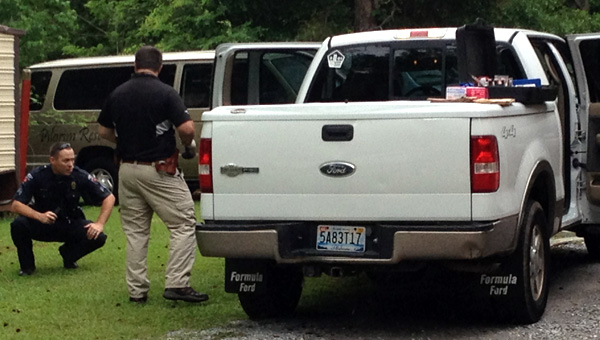 Officers with the Greenville Police Department search for evidence in the pickup truck used in the robbery of Bancorp South on Fort Dale Road. (Advocate Staff/Andy Brown)

According to authorities, at approximately 11:30 a.m., two black males entered Bancorp South’s branch on Fort Dale Road and demanded that the cashiers empty their cash drawers.

The men, at least one of whom was armed, made off with $11,000 in a white pickup truck, which authorities later discovered had been stolen near Daphne, Ala.

Officers quickly responded to the scene and began searching along Hwy. 185. They discovered the pickup truck abandoned behind Pilgrim Rest Baptist Church a short time later, along with the money that had been stolen.

Officers followed a trail of money into a wooded area near Pinedale Drive, and used K-9s to track the suspects, but the search came up empty.

“We initially thought they had fled into the woods on foot because of a money trail leading into the woods, but we now think that money was probably just blown in that direction when they opened the door of the truck,” Greenville Police Chief Lonzo Ingram said. “We’ve got some information now that leads us to believe they had another vehicle stashed here behind the church that they took off in.”

Lt. Justin Lovvorn said he believes the suspects heard the sirens and decided there wasn’t enough time to transfer the money from the truck to the getaway car, which authorities believe is a dark colored Toyota sedan.

Lovvorn said officers were able to collect fingerprints and DNA evidence from the pickup truck and hope to have it processed at the FBI’s lab in Quantico, Va.

“We should have the fingerprints back in about a week, and the DNA could take up to three to six months,” he said.

Lovvorn said local authorities are working with the FBI and have a potential suspect.

“There’s a guy that has the same (method of operation) that they were already looking for,” Lovvorn said. “He’s robbed other banks and staged vehicles near the robbery, like what we believe happened yesterday.”

Lovvorn said the suspects will likely be covered in red dye from the dye pack that exploded after the money was removed from the bank.

“It stains pretty bad, so it will probably be on them for several days,” he said. “We don’t believe they are local. We think they’re from down around Mobile, but if anyone notices someone with red stains on their skin that look like they might be from the dye pack, they should contact us.”

Anyone with possible information about the robbery is asked to call the Greenville Police Department at (334) 382-7461.