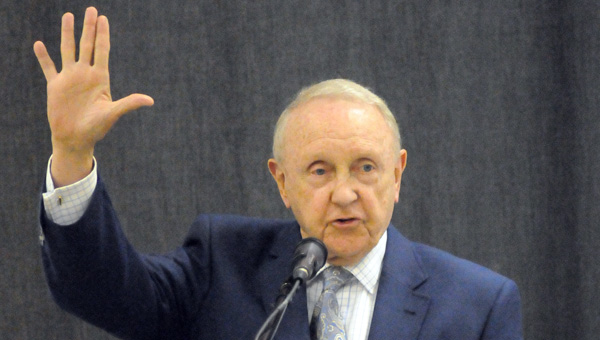 “I dare you. No, I double dog dare you to let God help you redefine the possible,” Mathison said.

Mathison, the former senior pastor at Frazer Memorial United Methodist Church in Montgomery, served as the keynote speaker for the 16th annual Achiever Award banquet. The Achiever Award recognizes top student-athletes from area schools who not only excel in the classroom and on the playing field, but are also involved in church and the community.

Mathison offered three points of advice to the nominees, and the others who attended Thursday’s banquet.

He challenged the students to set a goal.

Mathison cited Spencer West, a man born with a rare genetic spinal disorder called sacral agenesis that forced doctors to amputate both of his legs when he was just five. West went on to summit Mount Kilimanjaro.

“Dare to do what others say can’t be done,” Mathison said.

Mathison also told the nominees that they have to be willing to work hard to achieve their dream.

“There’s no free lunch, and there’s no such thing as luck,” he said. “Luck is when hard work and opportunity cross paths.”

Lastly, Mathison told the nominees that attitude is everything.

“Your attitude toward life is more important that happens in life,” he said. “God created you. He gave you a purpose for your life. Don’t let anything deter you from that purpose.”