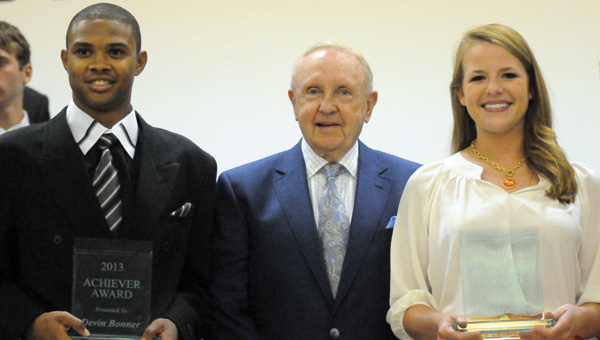 Devin Bonner could have used a pinch Thursday night.

“It really is surprising,” Bonner said. “I can’t believe it.”

The crystal award that Bonner held in his hands made things a little easier to believe.

The Georgiana School senior was selected as the 16th annual Achiever Award winner, along with Fort Dale Academy’s Anne Matthews.

“This means everything to me,” Bonner said. “It shows that all the hard work I put in at Georgiana over the years has paid off. This really means a lot to me. There were a lot of deserving nominees, and I still can’t believe I won.”

Like Bonner, Matthews was surprised to hear her name called.

“(Winning this award) means a lot,” Matthews said. “It tops off my senior year to say the least. It’s just such an honor. It’s so surprising to win. There were so many others that were deserving of the award.”

Bonner and Matthews were chosen over 25 other nominees from the four high schools in Butler County.

The Achiever Award recognizes one male and one female student athlete from area schools who not only excel in the classroom and on the playing field, but also in church and community involvement. As the 2013 recipients of the award, Bonner and Matthews each received a $1,500 scholarship to be used at the college or university of their choice.

Both Bonner and Matthews have been described as the epitome of what a student-athlete should be.

Bonner starred in football, baseball and basketball at Georgiana. He was nominated for the Wendy’s High School Heisman award. He is a member of the Future Business Leaders of America, SGA, Mu Alpha Theta, National Honor Society, Focus Group, Science Club, FACTS Club, and the Spanish Club. He served as SGA president his junior and senior years.

He is also the valedictorian of the Class of 2013, and has been awarded the Woodmen of the World American History Award.

Matthews was a standout at Fort Dale in basketball, tennis and track. She was selected as an AISA all-star for basketball and cheerleading. She is an honor student and president of the SGA. She is the team captain for the Scholars Bowl team and is a member of the math team, technology team, National Honor Society, Beta Club, FACTS Club, Mu Alpha Theta, FCA, and the Key Club.

She was also the winner of the 2013 Distinguished Young Woman for Butler County.

“Both of these students are deserving of the honor,” said Francine Wasden, a member of the Achiever Award board of directors, during the annual banquet at First Baptist Church. “They certainly are achievers.”