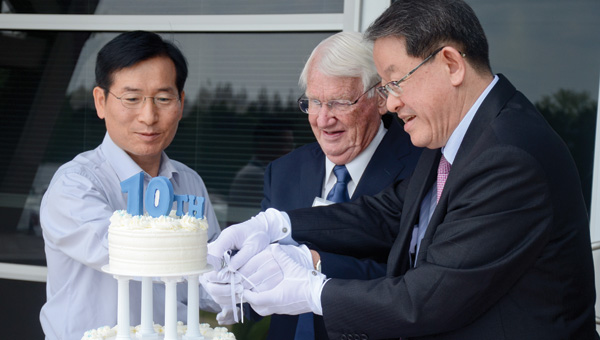 Ten years ago, dignitaries from two continents gathered in Luverne to make an announcement: Shin Young Metal Industrial Co. Ltd. would be bringing a new company to Crenshaw County to help supply Hyundai with auto parts.

Last Saturday, Stamped Metal American Research and Technology (SMART) celebrated its first decade with a ceremony and reception at its plant in Luverne.

SMART General Manager Gary Sport welcomed the hundreds of employees on hand and gave a timeline of the plant’s development.

“The company was formed in 2003, and the projected employment was 400 people,” Sport said.

That number has since increased again, and Sport said SMART currently employees 694 people.

Luverne Mayor Joe Rex Sport said that SMART came along at a time when Crenshaw County residents needed a local place to work because anyone looking for a job was being forced to travel outside the county following the shutdown of local textile mills.

“The greatest asset we have is our people,” he said. “This has led to other industries coming here, and word has spread that this is a good place to have industry.”

During the past 10 years, SMART has set the bar for Hyundai suppliers in America.

In 2008, it was awarded the Quality 5-Star Award, which is the highest award rating, for its achievements in its quality management systems’ evaluations and automotive operating standards.

“We were the first North American supplier to achieve that honor,” Sport said.

K.Y. Lee, director of Hyundai Motor Manufacturing Alabama, was on hand and thanked SMART for its hard work in helping Hyundai succeed in Alabama and the U.S. over the last 10 years.

“Congratulations from the bottom of my heart,” he said. “Without you, it would have been impossible to achieve the Sonata’s success.”

Ho Gap Kang, owner and CEO of Shin Young Metals, told those in attendance, “I love you.”

He recounted his first trip to Crenshaw County, which required flying 14 hours from Korea to Atlanta, driving three hours to Montgomery and then driving another hour to a place he called “my second home.”

Kang said he had visited other locations, but in Luverne he met John Harrison, who helped bring the industry to Alabama and Crenshaw County.

“I have fond memories of attending Little League games and Luverne football games,” he said. “It’s my honor to be your family.  I will do whatever I can for SMART, the city and its neighbors.”

Michael Griffin spoke on behalf of the employees and talked about how much advancement had been made in the past 10 years.

Some 177 current employees have been with the company since its founding, and those were recognized by name and given a special gift of a tablet computer.

Following the ceremony, a reception was held.