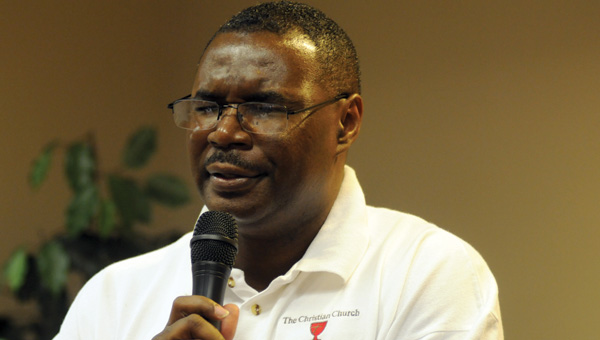 Tommie Means prays for the mayor, governor and president during the National Day of Prayer in Greenville on Thursday. (Advocate Staff/Andy Brown)

The gathering was part of the National Day of Prayer.

“This room is no stranger to prayer,” Greenville Mayor Pro tem Jeddo Bell said. “Before every council meeting we have prayer. We pray not only for our community, but for the world.”

The theme verse for this year’s event is Matthew 12:21, which reads, “In His name the nations will put their hope.”

“If we’ve ever needed prayer it’s now,” said Allen Stephenson, Butler County Ministerial Association president. “… God is sovereign. He is in control whether we recognize that or not.”

Stephenson said it’s important for the community to come together to pray.

“Now more than ever we need to gather as a community and pray,” he said.