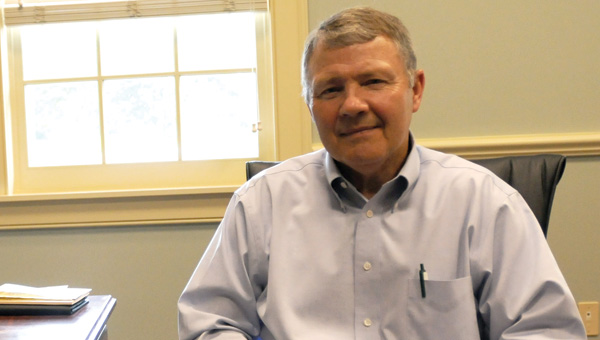 William Johnson has assumed the role of president and CEO of Camden National Bank. Johnson will continue to oversee the day-to-day operations at Butler County Bank. (Advocate Staff/Andy Brown)

When Les Johnson announced his plans to step down as president and CEO of Camden National Bank, he didn’t have to look far to find his replacement.

In fact, he didn’t even have to look outside his family.

In April, William Johnson assumed the role of president and CEO of Camden National Bank, succeeding his brother, who had held the position for 30 years.

With the promotion, William becomes the third member of his family to hold the post. His father also served as president and CEO of the bank for 30 years.

“I can tell you without a doubt I won’t be here for another 30 years,” William said with a laugh.

William, who will continue to oversee the day-to-day operations of Butler County Bank, which is a branch of Camden National Bank, said he is honored to have the opportunity to follow in the footsteps of his father and brother.

“It really does mean a lot to me,” he said. “It’s a big deal for me personally to be able to come in behind them.”

William said the opportunity to work with his brother and with a bank that his family had such strong ties to was something he just couldn’t pass up when it presented itself.

“(Opening a branch in Greenville) is something we had talked about for a while, and it just seemed like it was the right time to do it,” he said. “We felt like there was a niche for another independent, true community bank here in Greenville. The time seemed right, and I jumped on board.”

While William may not plan to be at the bank another 30 years, he doesn’t see the bank going away anytime soon.

“We’re going to be here, and we’re going to be who we are for a long time,” he said. “We don’t have any plans to sell the bank. We plan to stay right here and continue to serve our community for years and years to come.”