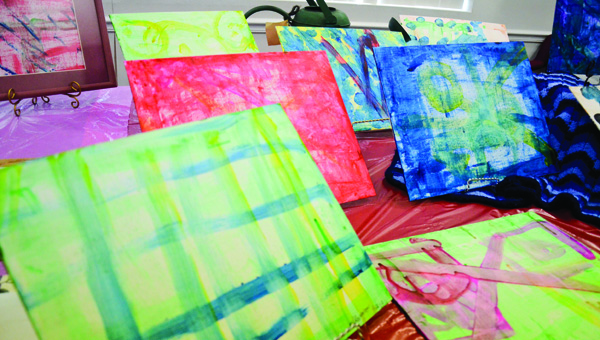 Some of the art Warren has created is on display at the Luverne Public Library this week.

Imagine going about your day-to-day activities without being able to see.  Now imagine trying to create a piece of art through painting.

Even though it sounds difficult, that’s exactly what Debbie Warren does, and some of her work is on display at the Luverne Public Library this week.

Warren is legally blind and has been been without her sight for over a decade.

She was inspired by her friend Cecilia Davis to take up painting last year.

“She said that she was so bored sometimes, so I thought there had to be something to do to get her mind stimulated and busy so that she wouldn’t feel like she was wasting the day away,” Davis said.

Davis told Warren that she should start making art, but Warren wasn’t sold at first.

“She said, ‘How can I draw a tree? How can I paint a flower?'” said Davis, who went on to introduce Warren to abstract art. “That means that however you feel something, that’s what you do on the canvas.”

Warren said she had seen abstract art before but had never really given much thought to it.

“When I was growing up, I’d go to the doctor’s office and see these paintings that looked like someone threw paint at it, but I didn’t have any clue what abstract painting was,” she said.

“You can’t make a mistake and you can’t do it wrong because it’s all about how you feel inside,” Davis said.

Warren now has a tabletop easel and a variety of paints, but mostly watercolors.

Even though she only started painting around last Labor Day, she has already completed about 40 works.

A former office room in her house has been converted into an art room, and Davis regularly visits and helps Warren with obtaining painting supplies.

The “In Her Vision” art show at the library is only the second time the public has seen some of Warren’s art.

Warren gave a few paintings away as Christmas presents to family members, but the pair recently set up a show at their church, Faith Walk Ministries in Luverne.

“A couple of weeks ago our church set them up there and sold some, and people were really amazed,” Warren said.

She said that she occasionally tries to draw shapes like circles and triangles, but often people see things in her art that she didn’t realize were there.

“All the different people see these different things in the paintings that I had no intentions of,” Warren said. “One person said they saw Jesus’s face.  One lady said she saw the Red Sea.”

“What I want people to do when they look at the paintings is say, ‘Alright, if Debbie can do that and she can’t see, then I ought to be able to do what I want to do and not give up,'” she said.

The art show is the latest project for the pair of friends.  Davis wrote a book about their friendship called “Debbie and Me,” which was released in 2011.

Warren’s art will be on display at the Luverne Public Library until Friday during regular library hours.

The art is also available for purchase.  The cost per painting is $12, and there is a signup sheet to reserve the paintings on display at the library. 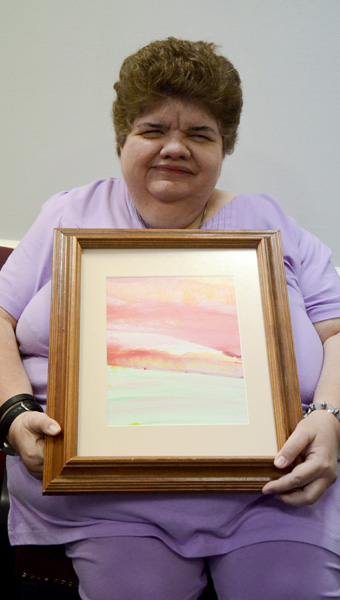 Debbie Warren holds up a framed piece of her watercolor art.