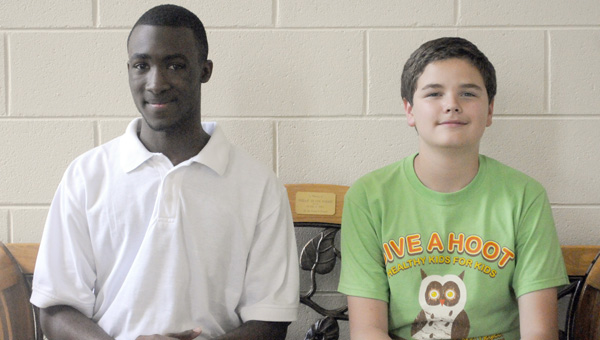 Each year, the state’s most gifted up-and-coming musicians are chosen to participate in the Alabama All-State Band Festival.

This year, Butler County was fortunate enough to count two Greenville students among its ranks.

There, the duo was also afforded the opportunity to try out for chair positions, learn new music and put on a concert — all in two days’ time.

Since January, the pair has worked their way up through several phases of the competition, including being elected as top musicians from the district level and participating in the All-State Honor Band in March.

Pryor said that although the festival was an enjoyable experience, there was just as much work as there was play.

“It was fun, and they have these conventions, which we all hang out of during the breaks,” Pryor said.

Neither Pryor nor Gavin is a stranger to the All-State Band experience, however.

Pryor, who is 12 years old, has made it to All-District three times and All-State twice.

Gavin, 15, has made it to All-District four times and All-State three times.

Gavin said that meeting familiar faces throughout the past four years has created plenty of opportunities for rivalries within each district, as well as at the state level.

But it has also fostered many long-lasting friendships.

“I had a wonderful time because I met some old friends, and then I had to meet new friends,” Gavin said.

“It was very fun, with us just being band nerds having a good time learning about new music, new lessons, new words and new dynamics.”

Pryor finished in the top 16 ranking of French horn middle school musicians in the state, while Gavin placed 13 out of 32 clarinet players.

Given the pair’s history of excellence, it’s no surprise that both Pryor and Gavin already eagerly await next year’s competition.

“I’ve been in band for five years, and the thing about music is that you don’t want it to stop,” Gavin said.

“You want it to keep growing and let it go further in life.”