From the newsroom to the stage 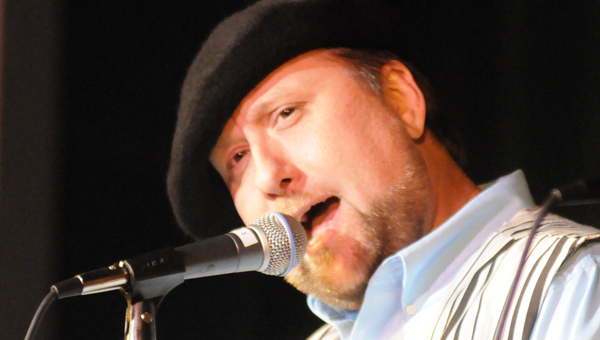 Former Greenville Advocate editor Kevin Pearcey traded his camera for a microphone. The Greenville native is among the nearly 50 performers that will take the stage Thursday on opening night of the seventh annual Putting on the Ritz production. (File Photo)

For years, Kevin Pearcey watched the Greenville Area Arts Council’s annual Putting on the Ritz production from behind the lens of his camera.

These days, the former Greenville Advocate editor’s view is much different.

For the second year in a row, the Greenville native is among the nearly 50 performers that will take the stage Thursday on opening night of the seventh annual Putting on the Ritz production.

Pearcey, whose experience on the stage prior to last year’s Putting on the Ritz performances was limited to church musicals as a teenager, said his role covering the annual event rekindled his interest in performing.

“It was always something I thought I’d like to try on a bigger stage,” he said. “Working at the newspaper allowed me the opportunity to document a unique, community experience so Putting on the Ritz did revise my interest in performing.”

When auditions rolled around last year, Pearcey made sure his name was on the list.

“I think it was a combination of things (that led me to audition), but the main one was seeing all the fun everyone else was having all those years before and wanting to join in,” Pearcey said. “When you go to Putting on the Ritz, as an audience member, you can really see the love and hard work that (Executive Director) Nancy (Idland), the crew and the cast members have put into making this such a great show. And that enthusiasm is contagious. You want to get up there with them.”

That’s exactly what Pearcey did. He shoved his stage fright aside and became a Ritz Player.

“(I had) some stage fright, but not much,” he said. “The good thing is you’re surrounded by people who are very supportive throughout. Backstage is like one big support group. We’re continuously offering praise and words of encouragement to each other. And you need that. I believe no matter how many times you’ve done a song or a dance, you need someone to tell you ‘good job.’ People like to hear that.”

The cast and crew of last year’s production certainly heard those words often. The Disney-themed production was one of the biggest and best to date.

Pearcey admits that it will be a challenge to top last year’s show, but he said Idland often reminds the cast and the crew that topping the previous performance isn’t really the goal.

“Nancy says, ‘we’re not trying to top ourselves … we’re trying to offer something different for the community to enjoy.’ I think that’s a good way to put it,” Pearcey said. “Last year’s Disney show was so elaborate with the costumes and sets. It was like one big festival and it was songs everyone knew and remembered. That said, I think this year’s show, with songs from Alabama artists, is going be just as outstanding and just as memorable.”

This year’s production will feature a number of tunes from artists with ties to Alabama, such as Hank Williams Sr., Jimmy Buffett, Lionel Richie and Nat King Cole. The show will also feature a set of patriotic numbers and a tribute to Butler County’s veterans.

“I would tell them to come out because people are going to be talking about this show until next April and they will want to know what everyone’s talking about,” he said.

The performances begin Thursday and run through Saturday.

The curtain rises nightly at 7:30 p.m. Tickets are $20 for adults and $15 for students and are available at The Pineapple and McFerrin’s Jewelry.