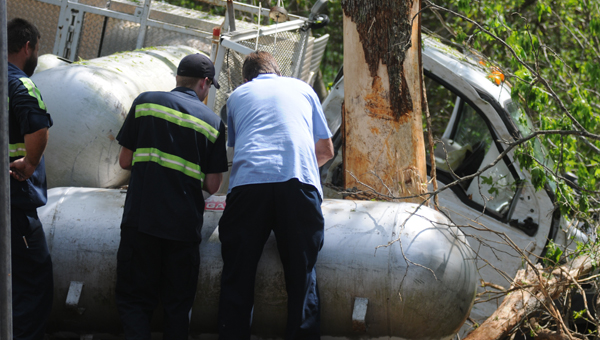 Officials work to empty a propane tank that was tossed off the truck that was hauling it after the truck exited the highway and collided with a tree Monday afternoon on Ala. Hwy. 185. (Advocate Staff/Andy Brown)

A single-vehicle accident involving a truck carrying propane tanks prompted the closure of Ala. Hwy. 185 near the Butler County/Lowndes County line Monday afternoon.

The crash occurred at approximately 2 p.m.

According to authorities, the truck was traveling south on Hwy. 185 when it exited the road and collided with a tree sending one of the two large propane tanks it was hauling flying off the truck.

Authorities on the scene said a bad situation could have been made much worse had a spark ignited the propane in the tank.

The driver of the truck was transported to L.V. Stabler Memorial Hospital for treatment. The severity of his injuries is unknown, and authorities have not yet released his name.