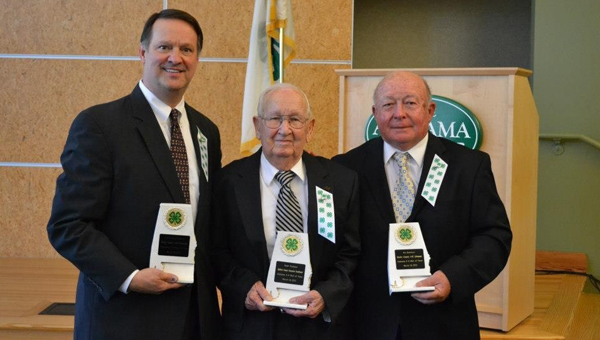 Four individuals with ties to Butler County were recently inducted in the Alabama 4-H Wall of Fame. Pictured are, from right to left, Eric Cates III, who accepted the award on behalf of his parents Eric Cates Jr. and Louise Cates; Ralph Thompson; and Rex Blackburn. (Submitted Photo)

It has been more than 60 years since Rex Blackburn first learned the 4-H pledge.

Even today, it influences the way the Butler County native lives his life.

“4-H instilled values in me that make for better living and citizenship,” Blackburn said. “As stated in the 4-H pledge, I’ve tried to use my head in making good decisions for myself, my family and my community. Serving as steward in my church, I also served on the ground and finance committees. Clear thinking is imperative to making sound decisions.”

Blackburn, along with Eric Cates Jr., Louise Cates and Ralph Thompson, were inducted into the Alabama 4-H Wall of Fame on March 19 during a ceremony held at the W. Gaines Smith Environmental Science Education Building at the Alabama 4-H Center.

The Alabama 4-H Wall of Fame recognizes individuals and organizations that have had a significant impact on the 4-H and Youth Development program and its members and leaders.

Blackburn, a 4-H alumnus, said he couldn’t wait to get involved with the organization as a child.

“My friends and I could hardly wait to be old enough to join the 4-H Club,” he said. “I can still remember the thrill of winning a blue ribbon and the honor of standing before my classmates. I raised chickens, pigs, calves and produce as 4-H projects, but these projects also helped to feed my family.”

Blackburn is still helping feed others. He uses his large garden to provide fresh produce for others in his community.

Eric and Louise Cates are longtime volunteers with 4-H.

As manager of the Agricultural Stabilization and Conservation Service in Butler County, Eric Cates became involved in 4-H fundraising. Louise Cares came to the Butler County Extension office almost weekly to assist with programs and was active in the Home Demonstration Council.

“In my 22 years in Butler County, we had more than 60 state 4-H winners,” said Ralph Thompson, a former Butler County Extension agent. “We could not have been that successful without outstanding volunteer leaders. The Cates family was tops when it came to leaders in our 4-H program.”

Thompson began working in Butler County as a 4-H agent in 1954. He retired in 1984 as the county Extension coordinator in Baldwin County.

During his tenure in Butler County, he recruited 80 percent of the county’s schools to participate in the 4-H program.

“He touched lives and opened doors for the young people,” Blackburn said.

Thompson was successful in securing sponsors for the 4-H programs and worked with sponsors to recognize 4-H members for their accomplishments. Thompson also made sure that if 4-H members won a trip to state or national contests that they had the things they needed for the event or contest.

“Mr. Thompson was always pushing, encouraging and recruiting me for various 4-H projects and programs,” said J. Paul Till, a 4-H alumnus. “Because of him, I entered and won awards in such things as the safety program, livestock judging and public speaking. Perhaps more importantly, he gave me more encouragement than I ever received at home and filled a void of support that was lacking for me, a shy, reserved farm boy from a small agricultural community in south Alabama.”