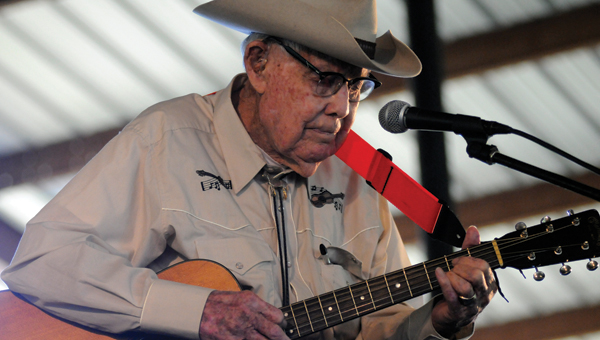 Braxton Schuffert performs at the 33rd annual Hank Williams Festival. A $5,000 grant awarded to the Hank Williams Boyhood Home and Museum will be used to help fund this year’s festival. (File Photo)

An establishment that has been gracing the town of Georgiana with culture for years has finally received a little something in return.

The Hank Williams Boyhood Home and Museum received a grant from the Alabama Department of Tourism to the tune of $5,000.

Museum operator Margaret Gaston said that although she was expecting visitors that day, she didn’t expect any of them to be carrying a $5,000 check.

“I’m so proud of it, I nearly fainted,” Gaston said.

“I’m still on cloud nine. My heart did several little flip-flops. It always does when something good happens for our community.”

Sen. Bryan Taylor and Rep. Charles Newton each wrote letters to the Department of Tourism, advocating for the necessity of the grant on behalf of the Hank Williams Boyhood Home Museum.

The grant was funded primarily by lodging tax dollars paid by tourists coming into the state for the purpose of festivals and similar events.

At one point in time, the lodging taxes depended solely on a town having the necessary lodging facilities within its limits.

Although the town of Georgiana no hotels or motels, Gaston said that Sen. Taylor and Rep. Newton were essential in conveying the museum’s importance to commerce in the surrounding areas.

“It was due to Sen. Taylor and Rep. Newton and their perseverance that the Alabama Department of Tourism realized that, even though we don’t have lodging in this town, we account for quite a bit of lodging during our festival,” Gaston said.

“Even though we don’t have motels here in Georgiana, the Greenville motels are almost always full for the festival.”

Gaston added that the funds would likely be used in preparation for the upcoming annual Hank Williams Festival, one of the biggest draws for the Butler County area each year.

Utilities and supplies are among the first priorities for the establishment.

“It’s time to begin ordering things to sell during the festival, like T-shirts, caps and CDs,” Gaston said.

“There are also some things here that we can spiff up inside the museum before the festival, as well.”

The Hank Williams Festival kicks off on May 31 and wraps up the following day on June 1.