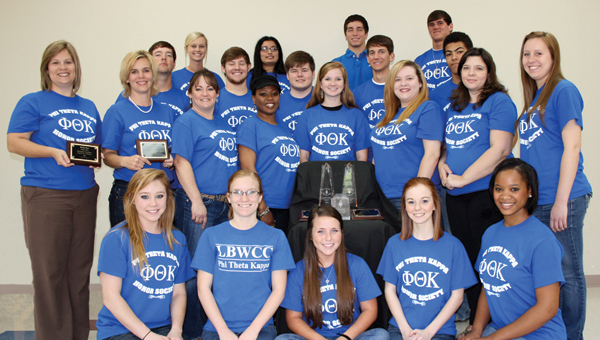 “These awards are reflective of the hard work and dedication of both students and advisors, and they certainly deserve this recognition,” said LBWCC President Dr. Herb Riedel.

The Distinguished Chapter Award is presented to the top 10 percent of chapters entering the Honors in Action and College Project categories. The ABE chapter was recognized for excellence in academic research into the honors study topic, leadership roles and leadership development activities, service learning, and collaboration.

These awards add to the 2013 collection of Alabama Regional Awards received in March, including the Distinguished Theme Award for receiving the highest score in the state and the Distinguished Honors in Action Project Award for scoring among the top five overall. Joli Jones, English and speech instructor, also received the Paragon Award for New Advisors, and Heather Owen, director of recruitment, received the Continued Excellence Award for Advisors.

PTK’s mission is to recognize and encourage the academic achievement of two-year college students and provide opportunities for individual growth and development through participation in the hallmarks of leadership, service, fellowship, and scholarship.

The Honors in Action event created by the ABE chapter centered around these four hallmarks and brought in 118 seniors from Florala High School, Pleasant Home High School, Red Level High School, and Straughn High School for a one-day event last fall. The event featured guest speakers and activity sessions on each hallmark component, all coordinated by chapter members.

“In addition to the leadership recognized in all the awards this year, students also worked to raise the needed funds to attend the international convention,” said Riedel. “On their behalf, we thank all who participated in the fund raising efforts of this dynamic group and allowed them to experience such an unforgettable event in their college career.”