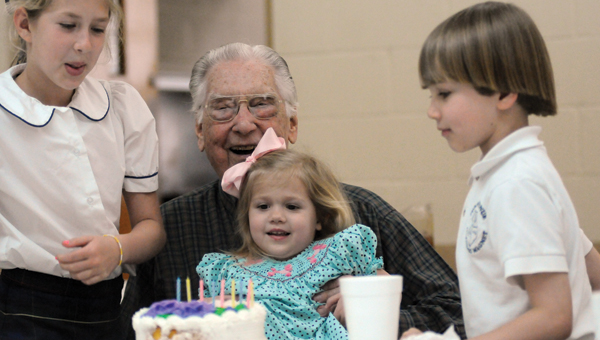 Gene Hardin gets a little help blowing out his birthday candles from his grandchildren Caroline Hardin and Will Hardin and great-granddaughter Kate Coles. Hardin was treated to a surprise birthday party Monday by the Greenville Lions Club. Hardin turns 90 Wednesday. (Advocate Staff/Andy Brown)

Gene Hardin has a way with words.

On Monday, however, words escaped the longtime editor of the Greenville Advocate.

“I’m not sure what to say,” Hardin said as he fought back tears.

The speechlessness and the tears were brought on by a surprise birthday party during the Greenville Lions Club’s weekly meeting. Hardin turns 90 years old Wednesday.

“I tried to do some research on different things that took place (on Hardin’s birthday), but it looks like the most historical event that took place that day was him being born,” Hubert Little joked.

Hardin’s birth certainly proved to be significant for the Camellia City, as he helped shape and record the town’s history.

He moved to Greenville in 1948 to work in radio, but ended up at the Greenville Advocate after falling in love with and marrying Nonnie Stanley, whose family owned the newspaper.

Hardin would go on to serve as editor of the Advocate from 1967 to 1994 when the newspaper was sold to Boone Newspapers.

In 2004, Hardin, who helped begin the Hall School of Journalism at Troy University, was presented a Lifetime Achievement Award by the Alabama Press Association – the highest honored bestowed by the APA.

Hardin was a dedicated newspaperman, and he showed that same dedication to his community.

“He was deeply invested in what was good for Greenville,” Frank Crowe said. “He’d do anything he could to help make Greenville a better place.”

Hardin worked toward that goal by serving two terms on the Greenville City Council. He also served eight years in the Alabama legislature during the terms of governors Lurleen B Wallace, Albert Brewer and George C. Wallace.

While in the legislature Hardin sponsored a local bill that has ended up having a significant impact on Greenville and the quality of life of its residents. The bill Hardin sponsored changed ownership of Sherling Lake from the state to the City of Greenville. Without the passage of the bill, Cambrian Ridge likely would not have come to town.

Hardin, a former director of the Greenville Area Chamber of Commerce and a member of the Industrial Development Board, was also instrumental in the expansion of the Mac Crenshaw Memorial Airport and the placement of the World War II memorial at the Greenville City Hall.

“Gene is a difference maker,” Frank Hickman said. “He’s been instrumental in a lot of different developments in our city over the years. He’s never been too busy to serve.”

Hardin has also served his community for more than six decades as a member of the Lions Club, which supports many sight saving-related programs along with hosting the annual Memorial Day Celebration in the Park.

“This club has meant a lot to me,” Hardin said. “I feel honored to have been a member for all these years, and I look forward to coming here every week. It’s getting harder and harder to get here, but I sure do enjoy it. It’s been a privilege to serve our community through this club.”