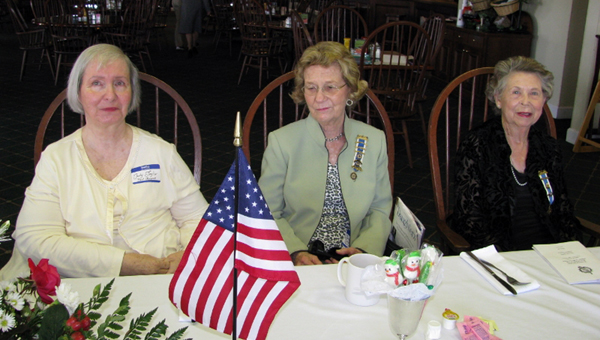 Three past regents attended the 50th anniversary celebration of the Fort Dale Chapter of the Daughters of the American Revolution. Pictured are, from left to right, Judy Taylor, Caroline Ryan and Mae Poole. (Submitted Photo)

The Fort Dale Chapter of the Daughters of the American Revolution (DAR) reached an important milestone recently.

The chapter celebrated the 50th anniversary of their charter.

The Fort Dale DAR Chapter was organized by Nora Dean Stroud Stabler, with the charter granted on Dec. 2, 1962.

Stabler was the first regent.

The Fort Dale Chapter ASDAR was named in honor of Fort Dale, a fort erected in Butler County in 1818 by Sam Dale, the famous Indian fighter. The fort was erected for protection of the settlers from the Creek Indians, who had committed several massacres in the area.

When Alabama became a state in December 1819, Butler County, one of the first counties to be created, choose Fort Dale as the county seat. The county seat was moved to Greenville in 1822.

Fort Dale was the site of Butler County’s first post office, store and first election. The first court in the county was held under an oak tree at the fort.

During the course of the chapter’s 50 years, an emphasis has been placed on honoring our veterans, Good Citizens contest and Americanism essays from at local schools, Community Service and Constitution Week.

The 50th anniversary meeting was attended by one local charter member, Caroline Ryan, who served as regent from 1966-68 and 1991-94.

The chapter also has two other charter members that are still active in Louise Ayer Stabler Tommie and Olga Lee Ryan.

The observance gathering was highlighted with the attendance of Constance Haynsworth Grund, the Alabama State Regent. Grund is also vice-chairman of the Kate Duncan Smith DAR School Board of Trustees and national chairperson of Constitution Week.