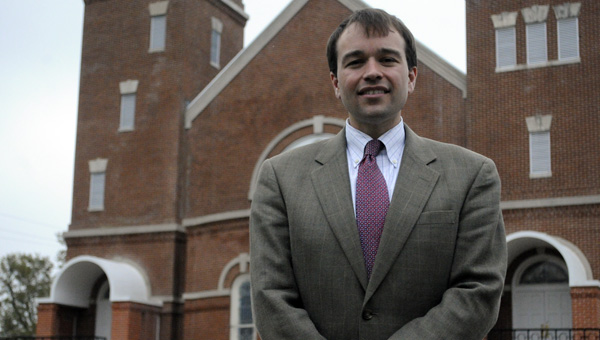 Answering the call has never been a problem for David Saliba, new pastor of Greenville’s First United Methodist Church.

When the bishop of Alabama-West Florida contacted him for the move to Greenville, he did as he was asked.

But in the month spent in Greenville thus far, the move has been nothing short of a blessing.

“Greenville is the epitome of Southern hospitality,” Saliba said.

“Everyone has been so nice, and they are very welcoming, loving people.  They can cook good food and they love to feed their pastor.  The people here not only care about us, but they are genuinely interested in the lives of me and my wife, and they’ve welcomed us in as members of their own family.”

Saliba is no stranger to Southern hospitality, as he has spent the majority of his life living within the State of Alabama.  His three-year stint at Emory University spent attaining his masters of divinity marks the only time Saliba has left Alabama.

Although he has been involved in ministry for the entirety of his adult life, he almost ended up in a very different field.

That was when he answered arguably the most important call of all.

“I’m a biological chemistry major, and before I went to college I worked in dental offices,” Saliba said.

“I thought I wanted to be an orthodontist, but God had something else in store for me.”

Since that fateful decision, Saliba has worked as one of God’s chosen shepherds in a variety of capacities, most recently serving as the executive minister at First United Methodist Church in Montgomery.

One of the largest challenges facing a minister in any community is realizing what a large responsibility the position entails.  Despite his relatively young age (Tuesday marks his 32nd birthday), it is a responsibility that he has already to come to revere and respect.

“There’s always something more that can be done,” Saliba said.

“It’s a great life, and it’s the best job in the world.  I wouldn’t want to do anything else with my life.  It is a job that I revere, so I want to do my absolute best all the time.”

Saliba is starting a sermon series beginning this Sunday and lasting each Sunday for the next six weeks concerning the parables of Jesus Christ.

Wednesday night bible studies are also being held from 5:30 p.m. until 7 pm., which include supper in the fellowship hall.

“We want everyone to know that this is a great time to come and visit,” Saliba said.

“Everyone’s invited to First Methodist, and we’d love for anybody in the community, especially someone who hasn’t’ found a church home, to come try us out.”