Sessions: ‘We must change’ 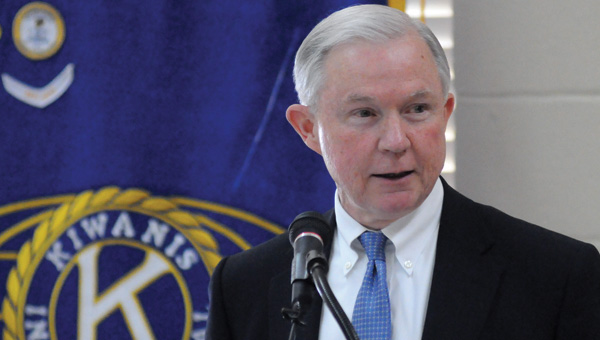 “You’ll hear people say, ‘Don’t worry. Everything will be OK.’ Well, we need to worry because the way things are going it’s not going to be OK,” Sessions told members of the Kiwanis Club of Greenville. “We are on a path that is unsustainable. We must change.”

Sessions’ remarks came in regard to the nation’s mounting debt, which is approximately $16.8 trillion.

“Financially we are not in good shape,” he said. “We aren’t spending your money wisely.”

“Without making some drastic changes, we can’t sustain that,” Sessions said. “There’s a big gap between 2 percent and six or seven percent.”

Sessions, the ranking Republican member on the Budget Committee, said the nation spends approximately $750 billion a year in  federal welfare and poverty spending, which he says is more than it spends on Social Security, Medicare or the Defense Department.

“We’ve got to move people into work and off welfare,” he said. “I’m not begrudging people. I know it can be hard to get a job, but we have got to get to the point that welfare is helping people who are down get off the mat to get up and get back in the workforce.

“Isn’t it a better goal to help more Americans find good-paying jobs, to have the pride and self-respect that comes from that? Isn’t this a superior form of compassion that has a more solid moral foundation? Yet every time lawmakers try to reform the bureaucracy to accomplish these goals, they meet with the same response: President Obama attacks the reformers, saying such ideas aren’t compassionate or fair,” Sessions said. “But what is truly unfair and lacking in compassion is to protect a federal bureaucracy that is failing those that need our help the most.”

Sessions said the answer is not more taxes, and pointed the recent $1 trillion tax increase.

“We need to grow the economy—not the government,” he said. “Government has never been bigger or more out of control. They say there is no problem with waste, fraud, and abuse; they say the problem is you; they say you are not sending them enough money; they say they have wisely spent every penny. So, you must just send them more. And, if you don’t? Well, they won’t stop spending, they’ll just borrow more. These destructive policies cannot continue. We are at the breaking point.”

Sessions, who grew up in Monroe County and Wilcox County, said when he looks at the nation’s current situation he is reminded of something a man from Evergreen once told him.

“He told me you can’t borrow your way out of debt,” Sessions said. “He’s right. I learned a long time ago that you can’t spend money you don’t have. There’s no way we’re going to borrow our way out of this crisis.”