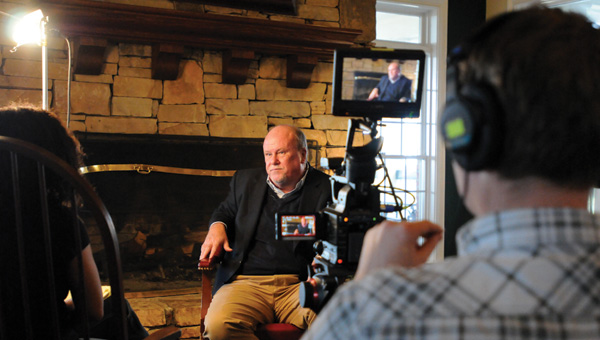 An independent film crew made up of members of the production staff of “Alabama Inc.” spent the day shadowing Mayor Dexter McLendon for a 15-to-20–minute documentary on the mayor’s role in landing two Tier-I Hyundai suppliers. (Advocate Staff/Andy Brown)

The Camellia City is no stranger to movie cameras.

In 2006, the city served as the backdrop for “Honeydripper,” a film starring Danny Glover and Sean Patrick Thomas.

On Tuesday, the Camellia City once again served as the backdrop for a film, but this time the star of the film was Greenville Mayor Dexter McLendon.

An independent film crew made up of members of the production staff of “Alabama Inc.,” a television program that aims to tell the stories behind Alabama businesses, spent the day shadowing McLendon for a 15-to-20–minute documentary on the mayor’s role in landing two Tier-I Hyundai suppliers.

“We want to show people some of the challenges small towns have in recruiting big industries to their area, and Mayor McLendon has been very successful in doing that,” producer Robert Clay said.

Clay said the crew originally met McLendon while shooting a piece for “Alabama Inc.” When the idea to make a short documentary on recruiting industry to a small town came about, McLendon immediately came to mind.

“He has a very colorful personality,” Clay said. “He’s very blunt about both the positives and the negatives, and that’s refreshing. We felt like that was something that a lot of people could relate to.”

McLendon viewed the documentary as an opportunity to promote Greenville.

“The way I looked it is if you have a chance to do something that promotes your community in a positive way you should do it,” he said. “This was a chance for us to let people know some of the good things that we have going on here in Greenville.”

The crew spent the entire day filming McLendon, starting with his 7 a.m. appearance on Q94. They were on hand for breakfast with his mother and a proclamation signing, and even went with McLendon to get his hair cut. They also conducted a sit down interview with McLendon at Cambrian Ridge.

“We have so much footage I’m already getting a headache thinking about what to edit out,” Clay joked. “I’m sure when we get into the editing process there will be things that stand out and that will make it easier to settle on what to keep.”

McLendon said during the shoot he didn’t think much about the crew following him around, but by the end of the day he was exhausted.

“It was a long day, but it was a great experience,” he said. “They were all very nice and I really enjoyed our time together.”

Clay said he expects the documentary to be completed by the end of April. He plans to submit the film to the Sidewalk Film Festival in Birmingham.

“We’ll probably submit it to a couple of national festivals as well,” he said.

Clay said the crew also plans to make a 30-minute cut of the documentary, which could air on Alabama Public Television.