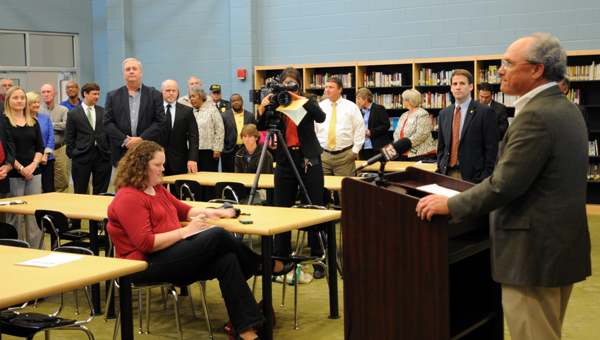 Local and state officials, along with community members, gathered at Georgiana School on Thursday for an announcement of a $20 million expansion at Coastal Forest Product’s Chapman facility. (Advocate Staff/Andy Brown)

Coastal Forest Products announced on Thursday a $20 million investment in its Chapman facility that will create an additional 50 jobs in Butler County.

Company President and CEO Travis Bryant said the money will be used to “make a lengthy list of capital improvements to the plant” that should help increase production by approximately 50 percent.

“We feel like we have a good opportunity to expand our plant both on the resource side and the people side,” Bryant said. “There’s certainly a risk whenever you make this sort of investment, but we feel like it’s a risk worth taking that will position us well for the future.”

Along with the 50 additional jobs that will be created at the Chapman facility, officials estimate that the trickle down will result in an additional 75 jobs in the county through the outsourcing of work.

Local officials also celebrated the news of Coastal Forest Products plans to expand its facility for the second time in two years. In 2011 the company made a $6 million investment in its Chapman facility to modernize equipment in order to increase production and lower operating costs.

“This expansion is going to create opportunities for people in Butler County to get jobs,” Butler County Commission Chairman Jesse McWilliams said. “This is a great day. We look forward to more expansions by Coastal (Forest Products) as they continue to operate in our county.”

Georgiana Mayor Jerome Antone said the expansion provides hope for his city and Butler County as a whole, which saw its unemployment rate rise to 11.4 percent in January – a number that reflects the latest unemployment figures released by the state.

“This gives us even more hope to push forward and continue to serve the folks of Georgiana and Butler County,” Antone said.

Coastal Forest Products, a subsidiary of Coastal Forest Resources Company, acquired the Chapman plant in 2009 and started operations in January 2010.