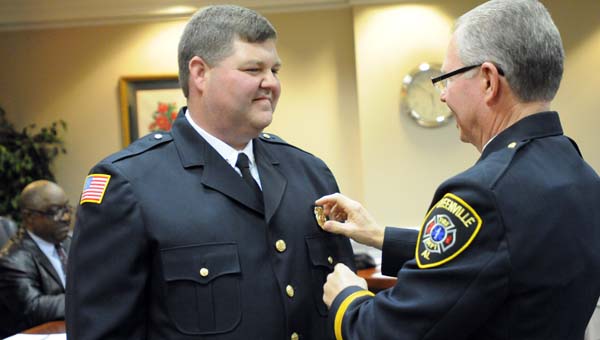 “It’s been an absolutely wonderful experience working with him for the last 21 years and having the opportunity to serve the Greenville Fire Department and the City of Greenville,” Chad Phillips said. “Tonight’s kind of bittersweet. I hate to see him leave, but I’m excited about the opportunity to lead the department.”

Chad Phillips began his career at the GFD in 1990 as a volunteer. A year later he joined the department fulltime. But the GFD was part of his life long before he became a firefighter.

“I grew up at the fire station,” he said. “I’m 41 years old, and my dad has been with the department for almost 41 years. I’ve been involved with it for all my life. This is what I know and I’m excited to start a new chapter at the department.”

Chad Phillips was sworn in as chief by Butler County Probate Judge Steve Norman, and his father Mike Phillips performed the badge-pinning ceremony.