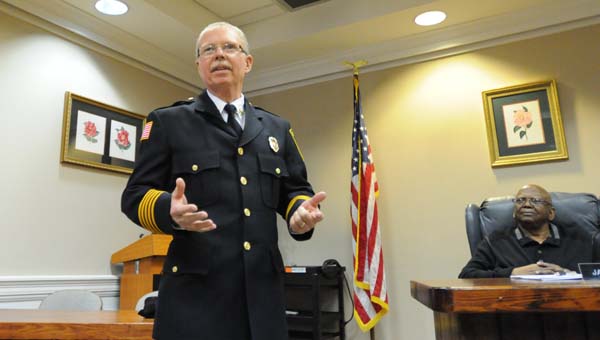 A longtime fixture of the Greenville Fire Department has stepped down.

After more than 40 years of service to the department, Chief Mike Phillips officially tendered his resignation to the Greenville City Council Monday night.

“I’m heading home,” said Phillips, who served as the GFD chief for 21 years. “It’s been a good 40 years. I’ve loved going to work every day and in a lot of ways (the fire department) has become home to me, but it’s time that I head to my other home.”

Phillips said he didn’t consider working at the GFD as a job, but a “pleasure.”

“This really is bittersweet,” he said. “I’m looking forward to retirement, but at the same time it’s like I’m leaving my family.”

Rep. Charles Newton praised Phillips’ 40 years of service to the GFD and the City of Greenville.

“The term public servant gets tossed around quite a bit these days, but that’s exactly what Mike Phillips has been,” Newton said. “Not only has Mike done an outstanding job for all these years, but he’s done it with a servant’s spirit.”

Newton credited Phillips with helping build “one of the best fire departments in the area.”

“You’re only as good as the people you surround yourself with, and Mike Phillips is one of the best,” McLendon said. “I appreciate all that he’s done for the City of Greenville, but more than that I appreciate the opportunity to be around him because of the kind of person he is. I hate to see Mike Phillips go, but he’s leaving our (fire) department in good hands.”

Phillips’ son, Chad Phillips, will take over as the department’s chief. The younger Phillips, who was appointed by the City Council, was sworn in as chief Monday night.

“He basically grew up at the fire house,” Phillips said of the new chief. “I know he’ll do a good job. He’s been helping run the department for a long time.”

Phillips said that while he’s excited to begin a new chapter in life, which will include spending more time with his grandchildren, he will miss going to the fire station each day.

“It’s very emotional,” he said. “Forty years is a long time to be at one place. It’s hard to leave, but I know that I’m leaving (the department) in good hands.”

Phillips said his retirement will also allow him to focus more of his attention on his other job. For nearly six years, he has served as pastor of Love’s Way Methodist Church, while also juggling his responsibilities as chief.

“I’ll have more time to focus on my job as a pastor,” Phillips said. “Over the years it’s been challenging to manage my time as chief and pastor, and now I will be able to focus more of my attention on my church.”