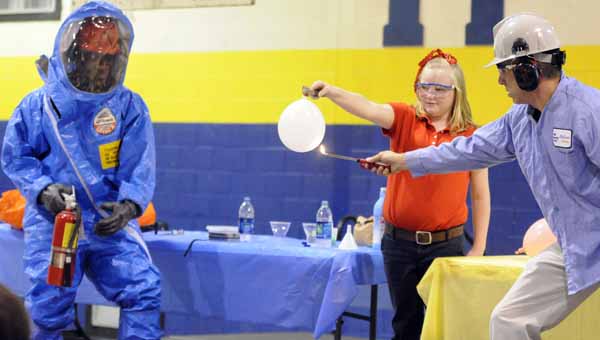 McKenzie School fourth grader MiKayla Blackburn takes part in an experiment during a demonstration by representatives from Saudi Basic Industries Corporation. Along with conducting experiments, SABIC also donated $3,000 worth of lab equipment and materials to McKenzie School. (Advocate Staff/Jonathan Bryant)

Fourth and fifth graders at McKenzie School learned on Monday that math and science don’t have to be boring or dull.

The results, more often than not, were explosive.

SABIC manufactures and sells chemicals, fertilizers, plastics and metals on an international scale, and the corporation is the second-largest petrochemical company in the world.

Michael Gunter, assistant principal at McKenzie School, asked the corporation for help with instilling an appreciation for science in children at a young age.

“We were contacted and we talked with them about seeing if they could partner with us to help us, as a small school, with our science lab,” Gunter said.

“We also wanted to build interest with the younger kids for science and try to encourage them to go into science-based fields.”

Although the topics discussed during the chemistry presentation were relatively complicated for fourth and fifth grade students, the SABIC relayed the information in a way that could be easily understood.

The end result was a presentation that was interesting, fun and relatable for children and adults alike.

Complex principles such as air pressure, endothermic and exothermic reactions, acid-base reactions and polymerization were reduced to simple applications that children could perform themselves.

Each fourth and fifth grader got to create his or her own plastic-like substance that resembled silly putty by combining glue and starch to form polymers.

The hands-on experience extended to the stage as children participated in experiments alongside the SABIC representatives that demonstrated the effects of liquid nitrogen on various objects.

The SABIC team concluded by reiterating to students the importance of paying attention in school, especially math, science and reading.

But the gift of enlightenment wasn’t the only one presented by the corporation.

SABIC also donated $3,000 worth of lab equipment and materials to the school.

Much of the equipment was standard lab room fare, like hot plates, scales, beakers and test tube holders.

But one donation was a much-needed replacement for an old McKenzie standby.

“We had an old skeleton, but it wasn’t articulated, and now it has turned into a disarticulated skeleton because it has been torn to pieces,” Gunter joked.

“With funding as it is, there’s not much that you can get a hold of, and the lab materials that they have donated to us are just unbelievable.”

Gunter added that he hopes the presentation and the new equipment will help prepare McKenzie’s young future scientists for the world of tomorrow.

“It’s good to show them at this age to get their interests sparked,” Gunter said.

“Many of these kids, especially from a small school in a rural area like this, don’t see themselves as being scientists.  This shows them that there are a lot of fields out there and that they can travel all over the country, and all over the world.  It also encourages them to study hard in math and science, which in today’s world is going to be required.”