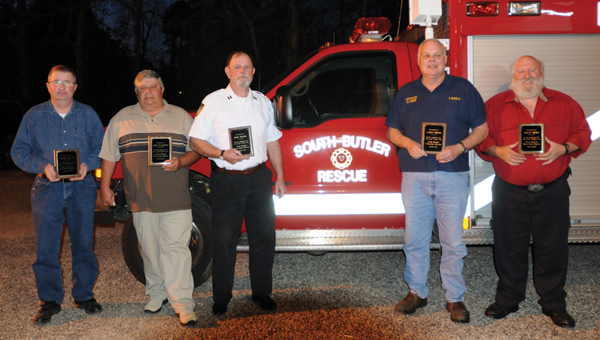 Seven or the original members of the South Butler Fire and Rescue Squad were honored Thursday night for 20 years of service to the squad. Pictured are, from left to right, Denson Scott, Kirby Blackburn, Eddie Holder, Larry Creech and Randy Wood. Not pictured are Stuart Taylor and David Scruggs. (Advocate Staff/Andy Brown)

Eddie Holder fought back tears as he thought back over the last 20 years.

“The older I get the more I can’t talk. I get to wanting to cry,” Holder said with a smile.

Holder was one of seven of the original members of the South Butler Fire and Rescue Squad honored Thursday night for 20 years of service to the squad.

The seven men helped start the South Butler Fire and Rescue Squad in January of 1993 after recognizing a need for a rescue service in the south end of the county.

“Before the squad was started if there was a wreck in the south end of the county, we had to call Greenville or Evergreen and wait,” Chief Alvin Dantzler said.

Tired of waiting, the men began raising money to purchase equipment and form the South Butler Fire and Rescue Squad. The squad started with 14 members. Today, seven of them still serve.

“There are seven of us left, but a whole lot more people have been involved and made this possible,” Creech said.

“Seven people didn’t do this,” Blackburn said. “Without everybody that has helped out over the years we wouldn’t have been able to do this.”