Students encouraged to ‘Stop The Bull’ 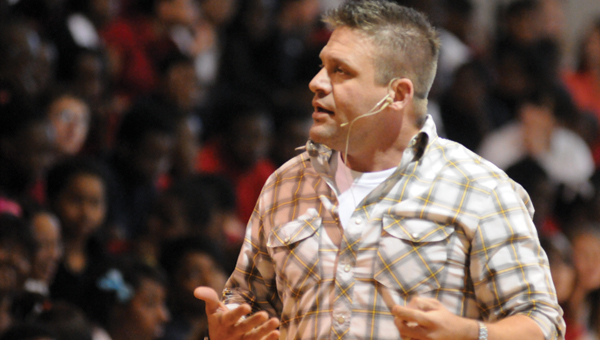 Troy McClain, a contestant on the first season of NBC’s “The Apprentice,” delivered an anti-bullying message as part of the “Stop The Bull” campaign – which aims to stop bullying in schools. (Advocate Staff/Andy Brown)

That’s all the time it takes to change someone’s life forever.

That was Troy McClain’s message to the students at Greenville Middle School on Tuesday.

McClain, a contestant on the first season of NBC’s “The Apprentice,” delivered the message as part of the “Stop The Bull” campaign – which aims to stop bullying in schools.

McClain, now a well-known television personality and successful businessman, shared with the students how things weren’t always so rosy for the Alaska native.

As a child, McClain’s father left him, his sister and mother, who had only an eighth-grade education, to start a second family. McClain’s mother, now a single parent, struggled to provide food and shelter for the family.

The family was forced to move from house to house, dodging landlords seeking past-due rent.

McClain’s world was rocked when a boy at school explained that he and his family weren’t upgrading houses. In fact they were being evicted.

“I was embarrassed. Then I felt shame, and finally it turned to anger,” McClain said.

McClain admits that he didn’t know how to deal with what he was feeling. So, when another student began to make fun of his sister, who is hearing impaired, he lashed out. He beat the boy so badly that he fractured his skull and his eye socket.

“My kid sister gave me the 10 seconds I needed,” he said. “She stepped in and signed, ‘Stop! You’re killing him.’ Those 10 seconds changed my life. She saved my life.”

McClain issued a challenge to the students.

“You guys can make the difference in someone’s life,” he said. “Be cool all you want to be, but don’t pull someone else down. Give them 10 seconds.”

Matt Kennon, a country music star, helped organize the “Stop The Bull” campaign after he witnessed a second-grade student being picked on at an elementary school near his hometown of Conyers, Ga.

Kennon had stopped at the school to eat lunch with his sister, a teacher’s aid at the school, when he saw the boy sitting alone, the victim of bullying.

Kennon befriended the boy and his conversation with the student led him to write “You Had to Pick On Me” – a song that has become an anti-bullying anthem.

That was Kennon’s motivation for spearheading the “Stop The Bull” campaign.

“We normally play honkey-tonks and bars, but this is something that’s really important,” he said. “These kids really are the future of America, and we felt like if we could do something to maybe stop a kid from getting bullied then we needed to do that.”

On Tuesday, Kennon performed “You Had to Pick On Me” and “The Call” for the students.

“We want to get the ear of these kids and really address the problem,” Kennon said. “It’s a problem in schools, but it’s not just schools. I’ve been bullied, even in the music industry. What we’re trying to do is show kids that they don’t have to bully other kids and if they are being bullied they aren’t alone.”