Locals recall ‘Storm of the Century’ 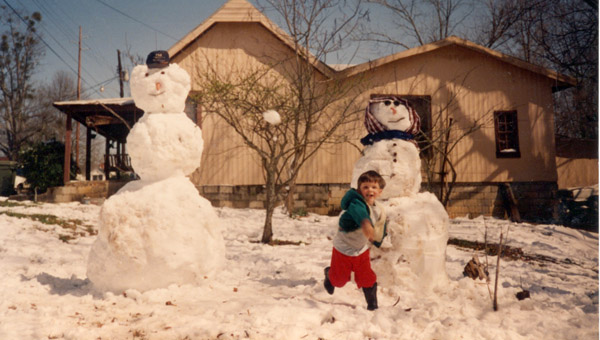 Cody Norman took advantage of the near-record snowfall to toss a few snowballs during the aftermath of the Blizzard of 1993. (Courtesy Photo)

Mollie Smith Waters had made the ride from her home to Winn-Dixie many times.

Heavy snowfall had hit the state, dropping between four to six inches of snow on Butler County and stranding many residents at their homes.

Thanks to her father’s pickup truck, Waters was one of a handful of Winn-Dixie employees that was able to travel in to work.

She still remembers well that snowy drive, although her vivid recollection has little to do with the snow that blanketed the area.

“Because most everyone else lived out of town, I was one of the few who could make it to work that day,” she said. “My father, who worked for W.S. Newell at the time, drove me to work in his heavy-duty work truck. On the way there, we were coming up the Fort Dale Road four-lane, and where Balaclava (Drive) comes in on Fort Dale, we saw somebody dressed in a giant yellow chicken costume standing next to the stop sign at that intersection. No joke. It was the most bizarre, random, out of place thing, I’d ever seen. Whoever was in the costume waved, but we were too stunned to wave back.”

The storm that dropped all that snow on Alabama has many names.

But more times than not, it’s referred to as “The Blizzard.”

On March 12, 1993, a low-pressure system began to strengthen in the Gulf of Mexico and move northeast. Forecasters began predicting a huge storm would hit the area and it would bring what could be record snowfall to the state.

The developing low-pressure system helped spread some light snow and rain into Alabama that Friday afternoon, but as the snow changed to rain, many began to doubt the forecast.

As the sun set and temperatures began to drop, those doubts were erased.

By the morning of March 13, the storm had blasted Alabama with more than a foot of snow in some areas, including between four and six inches of snow in Butler County.

Early forecast predicted nothing more than rain for the area, but as temperatures dropped, the forecast changed. With temperature dipping below the freezing mark, Greenville received its first frozen precipitation at 12:15 a.m. when sleet began to fall at an alarming rate. By 12:30 a.m. the sleet had turned to snow and within a half hour more than a half-inch of snow was blanketing the ground. By 1:45 a.m. there was already nearly three inches of snow on the ground as snow continued to fall.

The snow was also accompanied by wind gusts that reached 50 mph. The high winds and the weight of the snow caused power lines to snap leaving many in the county without electricity for several days.

Statewide the storm accounted for 14 deaths due to exposure and an estimated $50 million in damages.

Despite the wake of destruction left across the state, many in Butler County have fond memories of the storm, which is considered one of the top ten weather stories for Alabama in the 20th Century.

Robin Cox Hyatt, who was 14 when the blizzard hit Butler County, didn’t dress as big yellow chicken, but she did take advantage of the rare snowfall to snap an unusual photo.

“I thought it would be funny to make pictures in the snow in my swimsuit by a palm tree in the yard,” Hyatt said.

For Marcia Haskew Allen, the blizzard brings back memories of her late mother-in-law.

“I was pregnant during the blizzard of 1993 with my first child and was under strict orders not to go outside,” she said. “Everyone knew how clumsy I was, and still am, and felt that snow would surely add to my ‘gracefulness.’ My mother-in-law, Mrs. Nellie Hartley Bentley, had surgery only days before the blizzard and was not doing very well. Mrs. Nellie was released from the hospital in time to see the snow. She allowed me to walk outside with her and we were even able to throw a few snowballs. Mrs. Nellie quickly took a turn for the worse and was sent to Birmingham where she later died on April 2. My memories of the blizzard are special because they included this very special person.”