Fire tower taken down, moved, set to be restored 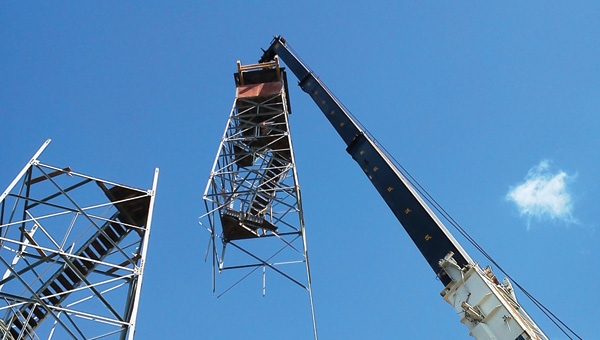 A crane lifts the partially-dismantled fire tower from its perch. The tower will be transported to New York for restoration. (Photo courtesy David Vana)

Anyone driving along the Glenwood Highway east of Luverne over the last week may have noticed a slight change in the landscape.

The fire tower that has long stood on a hill just outside town has been taken down.

David Vana, who owns Davana LLC Fire Tower Restoration, and his crew worked to dismantle the tower, and the next step will be to restore the structure.

“We go all over the country doing this,” said Vana. “We try to get them before the scrap metal dealers do.”

Vana said he works to restore the towers and relocate them, usually to other states.

“We find new homes for them,” he said. “Sometimes it’s with a private owner.”

Vana’s company is based out of Bloomingdale, NY, and that’s where Crenshaw County’s fire tower is headed for restoration work.

Jeremy Lowery, a state forester who works with the Alabama Forestry Commission, said that the tower hasn’t been used in its original capacity in more than 20 years.

Fire towers have been replaced by spotter planes, which fly over an area looking for fires.

If a fire is found, its location is cross-referenced with the Forestry Commission’s permits for prescribed burning.

Sometimes wildfires are reported through 911 by citizens.  In both cases, the Forestry Commission works with local volunteer fire departments to suppress wildfires.

Even though the tower isn’t needed anymore in an official capacity, Vana said he feels like it will be missed.

“While we were taking it down, we had several people stop by to talk,” he said. “One guy said, ‘How will I be able to give people directions now that I can’t tell them to turn by the fire tower?’ “

Vana also said that he is looking for any stories or recollections about the fire tower so that it can be passed along to the new owner.

Any stories can be e-mailed to firetowerrestoration@gmail.com. 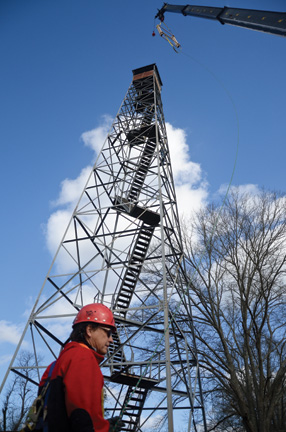 David Vana of Davana LLC Fire Tower Restoration stands in front of the Crenshaw County fire tower as he prepares to dismantle it.