The pursuit of happiness 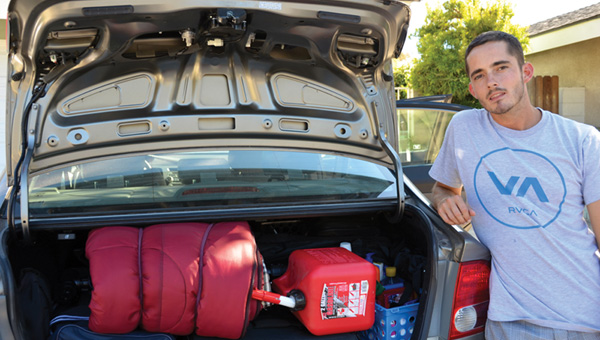 Tony Cuseo is traveling across the country filming a documentary focusing on the concept of happiness. The project is titled “Drive for Happiness.” (Courtesy Photo)

But the Orange, Calif., native isn’t using a hammer or nails to restore an old home.

His tools include a sedan, a sleeping bag and a video camera.

Cuseo, who arrived in Greenville on Saturday, is traveling across the country filming a documentary focusing on the concept of happiness. The project is titled “Drive for Happiness.”

“I tell people that this is a soul renovation,” Cuseo said. “I’m trying to deal with some of my stuff, and in the process turn into the person that I’ve always wanted to be.”

While Cuseo has only been on the road for six months, his journey really began when he was 13 years old.

“At age 13, I was diagnosed with Acute Lymphoblastic Leukemia and was told the survival rate for my disease was about 30 percent and I needed to begin intensive chemotherapy immediately,” Cuseo said. “I spent the next three years of my life in and out of the hospital for chemotherapy treatments.

“I lost my appetite and 25 pounds, suffered a stroke, a collapsed lung, and had food pumped into my stomach through a nasal tube. However, I was luckier than most and have been in remission since 2001.

“While I recovered physically from the disease, I continued to suffer psychologically. After stopping chemotherapy, I entered a period of severe depression and continued to struggle off and on for a few years until I finally made a concerted effort to get better. I took an interest in positive psychology and the study of happiness. I read articles and books that focused on happiness, optimism, well being, and related topics in hopes of achieving greater happiness in my life.

“My interest developed into a desire to not only better understand my own personal happiness, but to inspire happiness in the lives of others. This aspiration has motivated me to take a road trip throughout the United States and Canada to talk to people about true happiness and living a meaningful life.”

Through his trip, Cuseo also hopes to learn what truly makes him happy.

While interviewing a midwife in what he describes as a “hippy town” in California, Cuseo got a glimpse at what it is that makes him happy.

“She told me she was addicted to intimacy,” he said. “She said that being there with a family while they have a child is the most powerful experience in life. That really struck me. I realized that need for intimacy is how I feel, but I’ve never been able to articulate it like she did. What I want is to be able to share powerful experiences with people and connect and understand who we are.”

He said working on his documentary, which features both interviews with people he meets during his travels and interviews with Cuseo himself, has allowed him to go deep even with perfect strangers.

“It lets me break through all the shallow small talk you normally get with someone you just met and get right down to what makes them who they are,” Cuseo said. “That excites me.”

Cuseo also hopes that others will be inspired by the documentary.

“In college I was that weird kid that always said I was going to throw all my stuff in my car and drive around and live in my car,” he said. “That always intrigued me, but that wouldn’t have really benefited anyone but me. I wanted to do something that would be more meaningful to others. I think this documentary has the chance to be something powerful for people.”

Cuseo said he plans to spend the next six months “snaking and winding” his way back to California. Then he’ll begin the process of editing his footage and trying to market the film.

“I honestly don’t know much about that, but I’m hoping to make some connections with people who can help me with that,” he said. “I’d love to have the chance to show the documentary at some film festivals, but we’ll see. Whether that happens or not, this is something that I will be able to look back on and say that I did it, and that’s enough for me.”