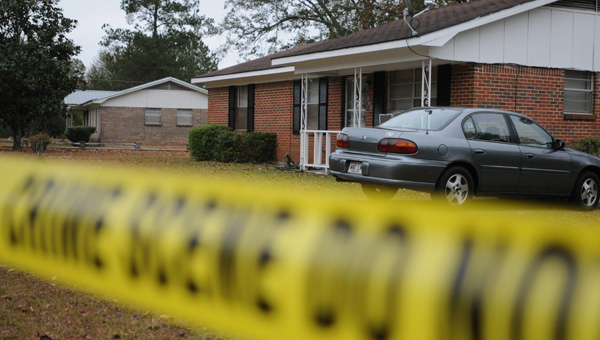 On Wednesday, District Court Judge McDonald Russell found during a preliminary hearing that authorities had probable cause to charge Shawn McClain, 27, with the murder of Dorothy Leatherwood, who was found stabbed to death in her home on Wise Street on Nov. 14, 2012. (File Photo)

A Georgiana man accused of murdering a 72-year-old Georgiana woman has been bound over to the Grand Jury.

On Wednesday, District Court Judge McDonald Russell found during a preliminary hearing that authorities had probable cause to charge Shawn McClain, 27, with the murder of Dorothy Leatherwood, who was found stabbed to death in her home on Wise Street on Nov. 14, 2012.

BCSO investigator Sean Klaetsch testified that authorities had found a gray T-shirt stained with what appeared to be blood in a clothes hamper in McClain’s bedroom. The shirt was sent to the Alabama Department of Forensic Sciences for testing.

“The test revealed that the blood on the shirt was that of Dorothy Leatherwood and that the shirt also had DNA on it belonging to McClain,” Klaetsch said.

Klaetsch said deputies also discovered an envelope with a note written on it on a side table in the living room of Leatherwood’s home that referenced money. He also stated that witnesses had informed authorities that McClain at times worked odd jobs for Leatherwood.

Authorities said that while being interviewed, McClain confessed to being inside Leatherwood’s home and pulling a knife on her, but that he had “blacked out” and did not remember anything after that.

The defense, led by attorney Brandon Sellers, questioned whether or not McClain could have written the note or understood the statement he was giving to authorities based on his mental competency.

Sellers asked Klaetsch if he believed, or was told, that McClain was “mentally retarded.”

“I believe his father said he was slow,” Klaetsch said.

Under cross examination by Sellers, Klaetsch also stated that while the residence was dusted for fingerprints, no useable prints were pulled from the victim’s house, and that knives collected at McClain’s home and tested by the Alabama Department of Forensic Sciences could not be connected to the murder.

Wednesday’s hearing was held to assure malicious, illegal, or otherwise inadmissible charges were not brought against the defendant without sufficient cause. It was not held to determine the guilt or innocence of McClain.

The case will now be turned over to the Grand Jury to determine whether or not an indictment will be issued. The Butler County Grand Jury is scheduled to meet next on March 11.