J.R. and Debbie Roberts honored as Citizens of the Year 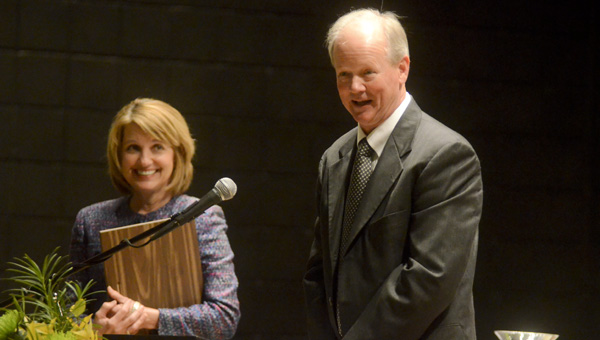 Debbie Roberts looks on as her husband J.R. speaks to the Chamber of Commerce as the couple were honored as Citizens of the Year.

Members of the Crenshaw County Chamber of Commerce came together on Thursday night to honor J.R. and Debbie Roberts, who were named Citizens of the Year.

U.S. Rep. Martha Roby was the guest speaker, and in addition to updating those in attendance on issues affecting the country, she also thanked the Roberts family for their willingness to serve.

“Being a servant to the community doesn’t always mean public office,” she said.

Roby said that she often speaks to high school students, and she tells them to “keep your eyes wide open” or they might miss their calling and open doors of opportunity.

“Thank you for walking through that door,” Roby said.

Willie Smith introduced the couple and said they were “two of the most generous people I’ve ever met.”

Debbie is a 1972 graduate of Crenshaw Christian Academy, while J.R. is a 1971 graduate of Talladega High School.

The two met at the University of Alabama as they both studied to be engineers, and they were married in 1977.

After the pair returned to Crenshaw County, they have been active in the community.

Debbie has served as District vice-president of the Alabama Alumni Association, Chairman of the Hospital Board, Chairman of the QA board at the Department of Human Resources, and around town as a master gardener and landscape consultant.

J.R. has been president of the Crenshaw County Alabama Alumni Association, and several scholarships were endowed under his leadership.

The couple also attends Campground United Methodist Church, where they are active in the church and have been on numerous mission trips.

J.R. and Debbie have also been foster parents for 17 years, fostering around 25 children during that time.

The two founded The Burning Bush Foundation, a non-profit organization that aims to help foster children.

Smith said that some of the Roberts’ most important work comes through their work with foster children.

“They give them the knowledge that someone loves them and cares for them,” he said.

J.R. said that their faith in God is what has guided them along the way.

He referenced James 2:18, “But someone will say, ‘You have faith; I have deeds.’ Show me your faith without deeds, and I will show you my faith by what I do.”

J.R. also said that he and Debbie had been blessed in their lives, and that much is required from those to whom much is given.

“Our service springs from a sincere desire to serve the Lord Jesus Christ,” he told the Chamber. “If you truly understand what He did for all of us at the Cross, then the gratitude and love you feel for Him should be enough motivation to want to serve Him.”

The couple has a daughter, Luann, who is married and has twin boys; a son, John Berry, who is engaged to be married in June; and a daughter, Gracie, who currently attends Pike Liberal Arts School in Troy.