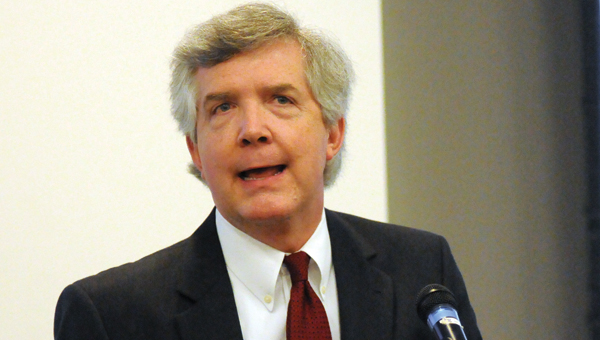 Gorman Houston moved away from Greenville 15 years ago.

But in many ways he never left.

“We moved from Greenville in 1998, but we never really left,” he said. “Instead, we’ve continued to treasure the memories and friendships we made here, so in many ways this is still home for us.”

On Thursday, Houston was back home serving as the keynote speaker at the Greenville Area Chamber of Commerce’s annual banquet.

He is now a professor of management and marketing in the College of Commerce and Business Administration at the University of Alabama.

“It’s hard to believe that it’s been more than 20 years since we first moved to Greenville,” Houston said. “We have so many rich memories of joyous times and hard times we had here. That’s the stuff of life.”

Houston said his time in Greenville was made special by the people that made up the community.

“From the first day we were here, we were welcomed with open arms,” he said. “It’s the people that make Greenville so special.”

Houston shared memories of many of those people as he recounted the six years he spent in the Camellia City.

“We’re small town people, so when we first got here and people would introduce themselves to us, it was like we already knew them,” he said. “They’d tell us their names and we’d be like, ‘Of course that’s who you are.’ In a small town you feel like you know someone from the moment you meet them, and that’s one of the things that makes living in a small town so special.”

But that’s not the only thing that makes a small town special, according to Houston.

Houston, who admitted that he on occasion watches “The Late Show with David Letterman,” presented the banquet attendees with is own top 10 list – the Top 10 Best Things About Living In A Small Town.

10. Your child, your yard and your dog make the news in a small town.

8. Living in a small town is like living in a novel.

7. In a small town, we’re all in this together.

6. In a small town, everybody is in your business.

5. Small towns are not complicated.

4. It takes a small town to raise a child.

3. Going to the big city is still a big deal.

1. The grass really is greener in Greenville.

“Twenty years ago, we were welcomed here with open arms,” Houston said. “We felt fortunate to be here then, and today we feel among the most fortunate in the world to be from Greenville.”