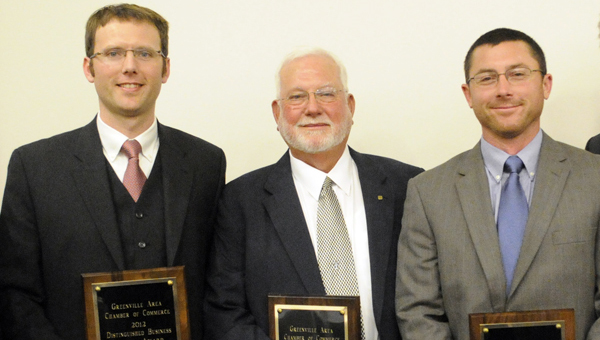 Jimmy Gardner has never wanted to be anywhere else.

As a lifelong Butler County native, he made a decision long ago to stay in Greenville, open a business and raise his family.

On Thursday, Jimmy Gardner, who opened his State Farm office in Greenville in 1982, was honored by the Greenville Area Chamber of Commerce as the 2013 Distinguished Business Leader of the Year.

“It’s wonderful to be where you want to be, doing what you want to do, and then get a plaque for it,” Jimmy Gardner said after being presented with the award at the annual Greenville Area Chamber of Commerce Banquet.

But Jimmy Gardner wasn’t the only business leader honored on Thursday. He shared the honor with his two sons, Josh Gardner and Caleb Gardner.

Josh Gardner returned to Greenville in 2006 to work for Bill Watson at Watson’s Animal Clinic. In 2010, he purchased the business from Watson and renamed it Clay Hill Animal Clinic.

Jimmy Gardner said he is fortunate to be able to share the honor with his sons, and grateful to men like Watson and Snellgrove that made it possible for Josh Gardner and Caleb Gardner to “be where they wanted to be and do what they wanted to do.”

“I’m fortunate to be in the City of Greenville and to be surrounded by my children and grandchildren,” Jimmy Gardner said. “I’m truly blessed. My cup runs over.”

Josh Gardner said he was humbled to be recognized alongside his father and brother.

“It’s an honor to be recognized,” he said. “It’s very humbling.”

Caleb Gardner said he was also humbled to be recognized, but that it was really his father that deserved the honor.

“I’ve been riding his coattails into some really great things for a long time,” he said. He deserves the award, not me, but I’m delighted to be honored alongside him.”

The Distinguished Business Leader of the Year is selected from the more than 300 members of the Greenville Area Chamber of Commerce, who have demonstrated strong community involvement and have had a proven economic or social impact on the community.