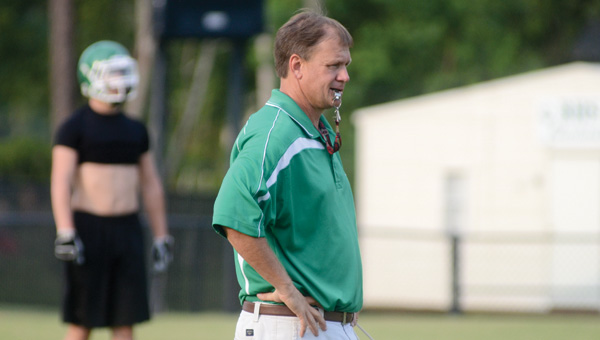 Brantley’s David Lowery is stepping down after 14 years as head football coach.

Brantley head football coach David Lowery is stepping down after accepting a position at the Central Office.

At last night’s Board of Education meeting, the board approved the hiring of Lowery as the system’s Director of Operations.

Lowery held a meeting with the football team this morning, and while Hawthorne said he has not received an official resignation, that step is a formality.

Lowery said the move hasn’t been made quickly or lightly.

“It’s something that doesn’t just come about all of a sudden,” he said. “I’ve been thinking about it.  As you get closer to 30 years in the system, you start thinking about trying something else.  It seemed like now is the time.”

Lowery has been a coach and teacher for 25 years.

“I’m looking forward to the opportunity to do something different,” he said. “I’m certainly going to miss the kids, being around the kids and coaching.”

“The best thing I can say is that he’s more than a coach,” Hawthorne said. “He’s a tremendous coach, and he will be very much missed at the head of our football program, but he also means a tremendous amount to our community and our school.”

Lowery has been the head coach at Brantley since 1999, and he led the team to a 15-0 record and Class 1A state title last season.