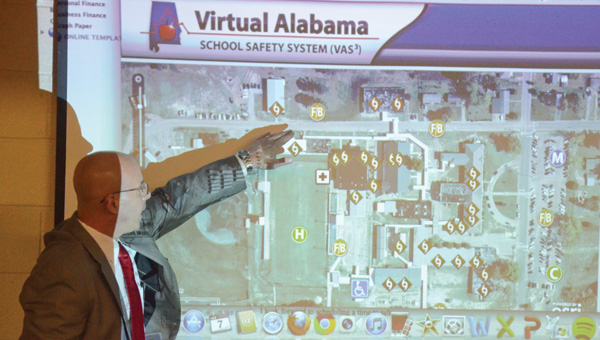 Luverne principal Greg Pittman points out an area of Luverne High School on the Virtual Alabama School Safety System at a summit with local first responders.

Last Thursday, law enforcement from around the county gathered at the Crenshaw County Board of Education’s office for a conference on school safety.

“We’ve been planning this meeting for several months,” said Superintendent Randy Wilkes. “We realize that we have new administrators and new law enforcement officers, so we need to get everyone on the same page.”

Police chiefs and officers, the Sheriff and a number of deputies, fire departments, emergency management and E-911 officials, mayors, elected officials and several county school employees were among those in attendance.

Wilkes said that first responders will soon have access to the Virtual Alabama School Safety System, a state-run website where administrators can detail a school’s safety plan.

“It depicts every one of the campuses, every floor plan, every safety drill that we do — all of that is on the map,” Wilkes said.

Everything from helicopter landing areas and utility and gas lines to the locations of defibrillators and triage staging areas were covered and are available through Virtual Alabama.

Wilkes also gave first responders a report on some of the safety improvements on the horizon for schools, including new locks for the doors and a switch to a new master key system.

School buses have been outfitted with GPS units for some time, allowing officials to  see where all buses are at all times, as well as recording the average speed of the bus and how many miles have been traveled.

A number of new safety regulations are also being put into place regarding pickup and drop-off of students from a bus.

Wilkes told the first responders that he wants them to be on campus more and be familiar with it.

“If you haven’t been in one of our building in three, five, 10 years, you may not understand the layout of it,” he said. “Things have changed.”