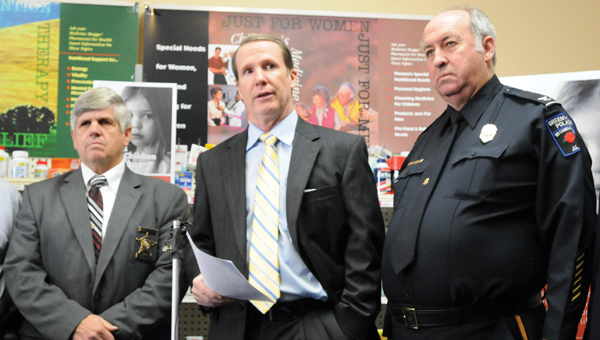 It may sound funny, but Butler County Deputy District Attorney Steve Townes said it is certainly no laughing matter.

Smurfing is a practice in which someone planning to cook methamphetamine pays someone else to go to a pharmacy and purchase a monthly allotment of pseudoephedrine in order to amass the necessary quantity of the product to produce meth.

“It’s serious,” Townes said. “It’s a felony and the District Attorney’s Office and local and state law enforcement officials are going to prosecute these cases to the full extent of the law.”

“This is an educational campaign to raise awareness about the dangers of meth and also the seriousness of smurfing,” said Rick Heartsill of the Consumer Healthcare Products Association.

The Consumer Healthcare Products Association, which represents the makers and consumers of over-the-counter medicines and dietary supplements, sponsors the campaign.

Heartsill said the need to educate the public about the consequences of smurfing came about due to a change in the state’s law.

Previously the practice of smurfing was a misdemeanor. Under the new law it is a felony.

“What that means is if you do it, you’re going to jail,” Heartsill said.

According to Townes, the practice of smurfing is a Class C felony. The sentence for a Class C felony conviction can be up to 10 years in prison and a fine of up to $15,000.

Under the new law, those purchasing pseudoephedrine must present a valid driver’s license, government ID, military ID or passport.

Such products can only be purchased from a pharmacist at a licensed pharmacy and the purchase is logged into the National Precursor Log Exchange (NPLEx) a real-time electronic logging system used by pharmacies to track purchases. An individual is allowed to purchase 7.5 grams of pseudoephedrine a month.

“(NPLEx) has helped cut down on meth production,” Harden said. “Before when we were using paper books, people would come in from different areas to purchase the products from pharmacies, but now they can’t do that because it’s logged electronically and available to all pharmacies.”

Both Harden and Heartsill acknowledged that while there is meth use and production in Butler County, it is not as widespread a problem as in other areas of the state and nation.

“We don’t have a big problem with it, and I think that’s because the Drug Task Force really stays on top of it,” Harden said. “It is a big problem across the state, but meth is something the Task Force has taken very seriously and for that reason we don’t see a lot of it in Butler County. Meth production and smurfing are things that we are going to continue to take seriously and do everything we can to put the folks that do them in jail.”

Heartsill said the new law, which he called the “toughest in the nation,” will help law enforcement officials do just that.

“The Alabama law is probably the toughest law in the nation, and it gives law enforcement the power to make arrests that they were not able to make before,” he said.

While the new law makes it more difficult to purchase pseudo ephedrine, it does not require a prescription.

“It does not force people to have to go to the doctor to get prescriptions for simple cold and allergy medicines,” Heartsill said.

The medicines are still non-prescription, but purchases will be logged in the NPLEx, which will track the sale of all of over-the-counter cold and allergy medications containing pseudoephedrine.

Two states – Oregon and Mississippi – have made pseudoephedrine prescription only.

“If someone wants to go in and purchase pseudoephedrine for themselves and a family member like a husband or wife, they won’t be able to do that if it is over the limit of 7.5 grams, and that’s inconvenient for some people, but it’s aimed at making it much more difficult for those who are going to use the drug to make meth,” Heartsill said. “It’s unfortunate that it creates an inconvenience for those who are not abusing the drug, but with meth being such a big problem across the state it is unfortunately necessary.”